This year’s NCAA Tournament provided not only a great deal of excitement, but an opportunity to discuss possible factors that relate to tournament success.  A WomensHoopsWorld staff writer did some quick analysis on the ratio of assists (AST) to field goals made (FGM), and came up with some initial statistics. We believed it would be interesting to examine this ratio as a possible indicator, as the AST/FGM ratio provides information on the level of team basketball being played. A low value would indicate a low number of assists per field goal made and accordingly, more isolations (one-on-one plays). Since team approaches are extremely important – particularly in women’s basketball – we decided to assess whether tournament success (number of tournament games won) correlated with this ratio.

To examine this relationship, I gathered 2016-2017 NCAA statistics (http://stats.ncaa.org/rankings/change_sport_year_div) on total field goals made, the number of assists dished throughout the season, and attempted to link them to wins during this year’s tournament. 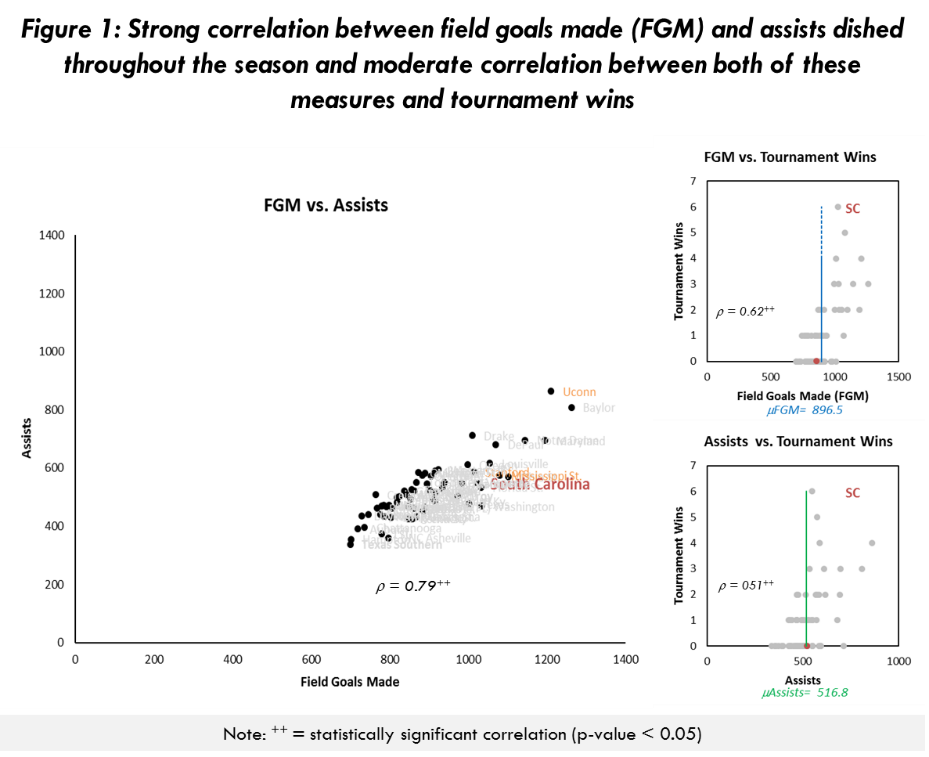 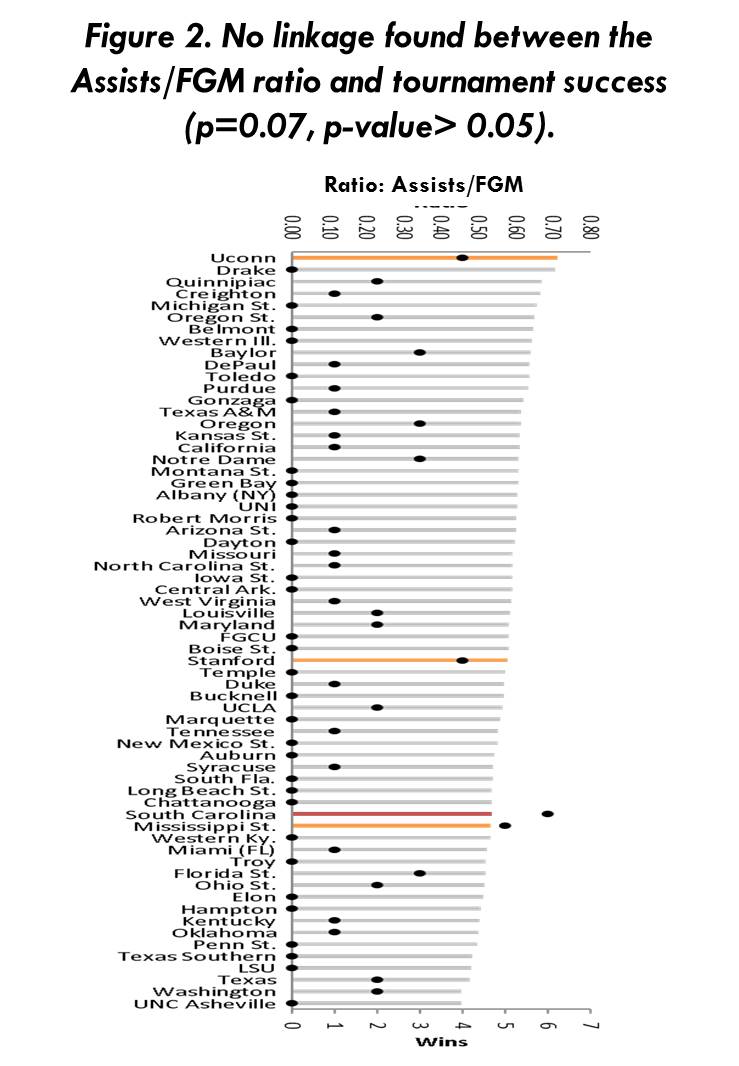 Accordingly, no relationship was found between the ratio AST/FGM and team wins.  End of story? Well, note that there were moderate correlations between tournament wins and both field goals made and assists (Figure 1), however, during the course of the season, ten teams converted more field goals and nineteen teams dished out more assists than South Carolina, the tournament champion. Further, during the tournament, only Mississippi State scored more field goals than the Gamecocks and four teams, including the remainder of the Final Four squads, had more assists than the eventual champs. So while both FGM and AST are correlated with tournament wins, they did not ensure success.

These findings beg the question: If neither FGM, assists nor the ratio are suitable indicators of tournament victory, what
is? What is a good “predictor” of tournament success? To answer that question, it was important to focus solely on the performance of the teams prior to the tournament. 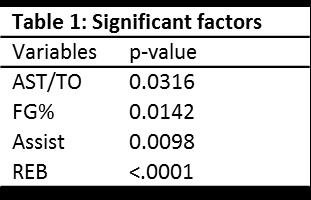 To explore the importance of the factors on tournament success, each variable was removed from the model one by one and the subsequent decrease in R2 was assessed (Figure 3, left side).

The flip side of this approach is to incrementally add variables to the model and examine the subsequent increase in R2 (Figure 3, right side).  In order of declining p-value, the process started with AST/TO which explained 14 percent of the variability.  The R2 increased to 25 percent when FG percentage was added, only gained a small bump after including assists and nearly doubled when rebounding was added (R2=0.48).  Using both approaches, rebounding was designated as the most important variable for tournament success.  However, the model accounts for a little less than half of the variability.

The relatively low R2 speaks to the possibility that (1) other variables need to be included in the model, (2) historical data may not provide enough information to capture the potential behavior, or (3) perhaps, the answer lies in the refrain of sports commentators far and wide: The playoffs are a whole other season and you can’t model grit and determination!   Coincidentally, while looking at various basketball means and measures, I came across Dean Oliver’s “Four Factors of Basketball Success.” Maybe the answer is here? It doesn’t seem as though the approach is often used to evaluate women’s basketball; hence, this may be my next foray into the world of sports analytics. Stay tuned!

Indiana, Arizona are first-time dancers in the Elite 8