The first five minutes of Sunday’s Pac-12 Tournament title game could not have gone better for Oregon State.

The Beavers made each of their first six shots from the field, and jumped out to a 16-3 lead. Ten of those points came off four Stanford turnovers.

After one quarter, the advantage was nine. But after scoring 22 points in the first, the Beavers could only muster 21 the rest of the night.

That wouldn’t be enough for OSU to win its second straight tournament title.

Stanford’s lockdown defense, and frigid shooting by the Beavers propelled the Cardinal to its 12th Pac-12 Tournament trophy, with a 48-43 victory at KeyArena.

“It was a heavyweight battle,” said Stanford head coach Tara VanDerveer. “We kind of got the bloody nose first, but that motivated people to keep laying hard, and make some plays.”

Alanna Smith led all scorers with 18 points for Stanford (28-5), while Karlie Samuelson had 14. Erica McCall had eight points and eight rebounds.

Oregon State (29-4) was paced by Sydney Wiese’s 13 points and a double-double from Marie Gulich (10 points and 10 rebounds).

After OSU’s torrid start, the Beavers were hamstrung by a shorter rotation, with guard Mikayla Pivec’s second foul with less than two minutes to play in the first. The team was already without guard Katie McWilliams, who missed all three Tournament games with an undisclosed ailment.

While the OSU defense held up as Pivec sat the entirety of the second quarter, the Beavers went cold from the field.

“We had total control of this game when she picked up that second one, and we were flowing so well offensively with that group,” said Oregon State head coach Scott Rueck.

Stanford pulled within three before the break, but a three-pointer by Wiese at the buzzer gave the Beavers a six-point edge at halftime.

Oregon State held onto the lead throughout the third quarter, with a 36-34 advantage heading into the fourth.

But over the final 10 minutes, the Beavers made just one field goal, going 1-for-12.

Stanford took its first lead since 3-2 with a layup from Smith with 7:28 to play, and extended its lead to six with just over four minutes to go.

A three-pointer from Wiese brought the Beavers within three. Oregon State would get the ball twice with a chance to tie the game, but turned the ball over each time, the latter with 90 seconds left. A jumper by Brittany McPhee put Stanford back up five, and OSU would not get the ball back within one possession.

The Beavers were held to just 14 second-half points, by far their lowest scoring output in the final 20 minutes this season. They scored seven in the second, third, and fourth.

“To hold them to seven points in three quarters is phenomenal,” VanDerveer said.

And after losing the first two match ups of the season, and finishing just one game behind the Beavers in the conference standings, the tournament title served as a worthy prize.

“We really wanted this tournament,” Samuelson said. “We knew that we could do it.”

For McCall, who said those earlier losses to the Beavers “hurt bad,” the redemption of Sunday night was, in a word, sweet. 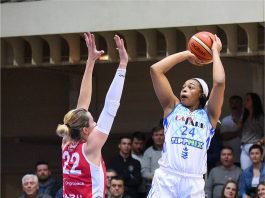 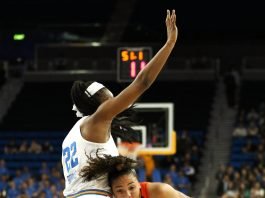