Not only did Oregon freshman Sabrina Ionescu have an exceptional week on the court herself, but she guided her team to an upset and a weekend series sweep of the Southern California schools. As a result, the Ducks are now in the conversation for an NCAA Tournament bid, and Ionescu is WomensHoopsWorld’s player of the week for Feb. 6-12.

The top-ranked recruit in her class, Ionescu wasted no time making her mark at Oregon in beginning the year as a starter, and then posting a triple-double just the third week into the season. A second came two weeks later and a third triple-double, last month. In the Ducks’ upset of No. 15 UCLA Friday, Ionescu had 11 points, 10 assists and 10 rebounds, and leads the NCAA in triple-doubles by a large margin. Against USC Sunday, Ionescu had a team-high 22 points and grabbed 11 rebounds.

Oregon was picked to finish near the bottom of the talent-laden Pac 12 Conference, which has the NCAA’s highest RPI. But after the weekend’s wins, they are tied for fifth place with No. 23 Arizona State. A big factor in their rise has been Ionescu and her energy, which helps feed the team.

To see such performances and leadership from a newcomer is exceptional. This is Ionescu’s first player of the week honor, but it likely won’t be her last. 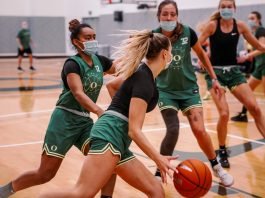