Dan Burt enters his fourth season as Duquesne’s head coach this fall, after serving six years as an assistant coach for the program. Last year Burt guided the Dukes to a school-record 28 wins and 13 Atlantic-10 Conference victories. They upset Seton Hall in the first round of the NCAA Tournament, and lost to No. 1 Connecticut in round two in a spirited battle where Duquesne played with high energy until the final buzzer.

Burt began his coaching career in 1998 as an assistant coach at West Virginia, and served in the same capacity at UNC Wilmington and Bucknell before becoming a Duke assistant in 2007. He has a 71-30 overall record since becoming head coach.

This is your fourth year as head coach at Duquesne. Do you feel like this is your program now?

I thought it was my program from the moment I took over, and after the first year. We had some kids graduate, and it’s been my program since. We’ve definitely put our stamp on it. The way we run things is completely different from when I was an assistant coach, although there is no right or wrong way to do it. It’s been a really great ride.

What’s special about coaching at Duquesne?

I’m from Pittsburgh and don’t know too many DI coaches who have an opportunity to be a successful head coach in their hometown. You have a strong Catholic university located in one of the most vibrant cities in America. It’s not the size of New York, Los Angeles or Chicago, but there are 89 different neighborhoods with a lot of diversity. This has allowed us recruit internationally.

How did you make the transition from assistant coach to head coach? What are the main differences for you?

You’re never ready for that transition. You think you are. You take these long lonely drives down dark highways and you daydream and take notes and try to prepare. But until you move into that seat, you don’t really know. Management of people and how you treat people is the key to success. How you discipline, motivate, clearly give them direction and talk to them is critical. You can’t miscommunicate the direction in which you’re moving the program. My staff had two former head coaches at first, and I leaned on them earlier in my career. You learn how to prioritize issues: is this a situation to fight for, or leave for another day.

So may young head coaches don’t clearly articulate what they want. What time do they want a player in their office; how do they want a ball screen set. Details are important.

The Dukes finished so strong last year, and didn’t back down from UConn. Did that surprise you?

No. I woke up the morning of the UConn game and told my wife “my kids really believe we’re going to beat UConn today.” They were completely all in. Obviously we took a loss to the best team in the world in our sport. But I loved our fight and how we played, with great energy and pride. We wanted to see them, were excited to see them in my bracket. We are currently in negotiations with Geno (Auriemma) to play a game. I want them to see the best and how hard you must play on every possession. Were excited to play them and learned a whole lot about ourselves and our program. This summer we saw the difference in how they practiced.

What would you say are the fundamental tenants of your program?

To play in our program you must be self-motivated and truly love basketball. It’s a point of pride with us. It’s not my responsibility to give you a “Rocky” speech. We want players who have character, and we will take a little less talent to get that. Diversity is a big part of our program, We tell people if you can’t accept cultural diversity, this isn’t the program for you.

On the floor everyone talk, and we play fast. We’ve been at the top of the A-10 in scoring the last few years. We try to play a lot in transition. Our offensive coordinator Matt Schmidt is one of the best assistant coaches in America. We look for kids who self-motivated, who want to be professional and have great character. We’re not interested in kids who are 24/7 basketball. We want you to be able to talk elections and news, too.

How have you changed and grown as a coach over the last 19 years?

When I started coaching I remember writing paragraphs to recruits. Now in the age of 140 characters, if you don’t impact them in the first two sentences, you’re not going to impact them.

I’ve grown up and I’ve grown up in the profession. I’ve learned you don’t need to be a hard ass and you don’t have to yell and scream. The best way to have success is to let go. I et players and coaches know I’m a steward of the program. The players design our gear and uniforms. They tell me where they’d like to go in scheduling. All have ownership of the program, and I truly let them have that and let go as a leader, but I give them guidance.

I’m not insecure. I’m not the best basketball coach, but I hire good people around me.

What’s the best thing about coaching?

Very simply, the impact you have on your player’s lives and your staff’s lives. I try to have my assistant coaches have a well-balanced normal life by coaches standards. We attempt that as much as we can. Parents are allowed to come to practice at any time, unannounced. We have no closed practices.

When they have a degree, I take pride in that. I’ve tried to model my program after (former Noth Carolina coach) Dean Smith and what they created with the Carolina family.

Do you have ambitions to coach anywhere else?

No. I signed an eight-year extension in July, and I believe it’s the longest contract in women’s basketball. I said this when I was hired at the press conference, that this is the last place I’ll coach in America. I hope I’ll be there 15 years, and maybe follow my wife and move overseas when it’s all said and done.

What is your favorite vacation spot?

Croatia is my favorite vacation spot. My wife is from there, and we like to pend summers on the Croatian coast 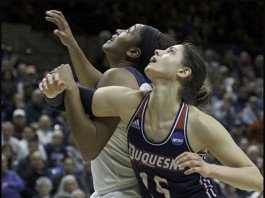