But for every Storm run, Minnesota had an answer, and did just enough to spoil Seattle’s home opener with a 78-71 victory in front of a sellout crowd of 9,686 at Key Arena.

Alysha Clark finished with a game-high and career-high 20 points for Seattle, while rookie sensation Breanna Stewart notched her second double-double of the season with 14 points and 13 rebounds.

“Any time you play against one of the best teams — and they are the best, they’re the reigning champs — we had to step up our play,” Clark said. “And we saw really good signs that we were right there.”

Minnesota – arguably the deepest team in the WNBA – had a balanced scoring approach with five players in double figures, led by Maya Moore’s 17 points and Sylvia Fowles’s 15, in a game where the Storm couldn’t grab the lead after a frantic-run late in the first quarter.

After trailing by nine midway through the first, Seattle outscored Minnesota 14-0 over the final three and a half minutes to take a five-point lead.

That margin would be the Storm’s largest advantage of the game.

The Lynx used a 9-0 run of its own in the second quarter to pull ahead, and led 46-41 at the break. Both team went cold to start the second half, each with just two points in the first seven-and-a-half minutes of the third.

Time and again, Seattle chipped away at the advantage, and trailed by just one with less than seven minutes to play at 60-59. But that’s as close as the Storm would get.

Over the game’s closing moments, Jewell Loyd said, Minnesota was able to make the most of their size advantage on the boards.

Storm coach Jenny Boucek, who received a technical foul with a just over a minute to play in the third, raised questions about the officiating after the game, particularly in what that meant in the post.

“The referees let them be extremely physical, which is confusing to me because a point of emphasis this year is supposed to be freedom of movement, and we had no freedom to move around,” Boucek said. “That’s confusing to me, and that hurts our team in terms of the style that we play, and Stewie, I thought it hurt a little bit when they got really physical with her, and the referees were letting them do stuff that is not legal.”

In particular, Minnesota was able to shut down Stewart over the game’s final 20 minutes, as the top pick went 0-for-10 with zero points.

When asked whether Stewart’s second half was a matter of ‘growing pains’ for a rookie, Boucek again alluded to Minnesota’s physical post play, and how the officials handled it.

“One possession in particular sticks out in my mind, where we ran a post-up play for her and she got absolutely manhandled two shots in a row under the basket,” Boucek said. “I don’t know what more she could have done. She had two feet in the paint and got crushed, two shots in a row, so is that growing pains? I don’t know. Or is that refereeing? That’s your decision.”

Seattle is back in action on Thursday against the 1-3 Mystics at Key Arena at 7 p.m. 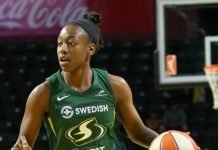 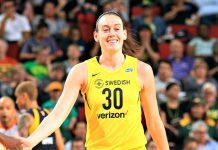 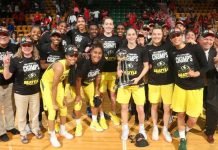