As the Huskies closed in on their 85-72 Sweet 16 upset of No. 2 seed Kentucky, January wondered on Twitter if the forward could go to Indianapolis with her team’s ninth pick in next month’s WNBA draft, ending her post with the hashtag, “#uppedherstocktoday.”

In the UW’s unprecedented run to the Final Four, Walton has increasingly caught the attention of a national audience, averaging 20 points per game — including a 30-point effort against the Wildcats in Lexington — while playing a full 40 minutes in all four Tournament games.

“It’s such a blessing, it’s so much fun to be able to see all of our hard work pay off,” said the 6-foot-2 senior. “This is something that not many girls in their collegiate career will get to experience and so I’m just happy that my teammates and myself are able to just soak up all this love that we’re getting.”

That recognition is a far cry from the rigorous recoveries that have accompanied every summer since she’s arrived at the UW.

After the end of each season, the Federal Way, Wash. native has gone under the knife, with three surgeries on her right knee, and one on her left. But Walton takes the physical hurdles in stride, saying that everything happens for a reason.

“The surgery’s not the hard part,” she said. “It’s the recovery. Being able to do rehab, and go through all that you have to go through, it gets hard, but you just have to learn to push through it.”

And push through it she has, starting at least 30 games in all four seasons. This year, she finished third in the Pac-12 in minutes played at just under 37 per night, behind only Cal’s Mikayla Cowling and UW teammate Kelsey Plum.

To keep the swelling down in her knees, Walton uses plenty of ice and takes an anti-inflammatory, while keeping everything around her knees loose.

Assistant coach Adia Barnes has been on the UW staff for all of Walton’s tenure, and remembers soon after she arrived, when, “everyone said that there’s no way she could play four years of basketball here.”

“She has battled,” said Barnes, who played seven seasons in the WNBA. “She’s taken care of her body. She’s gotten her hips stronger. She’s done a lot of things off the court that have enabled her to have a career on the court.”

Barnes said Walton has always been a versatile player, but she’s become a much better 3-point shooter, and especially this year has shown her ability to post-up when she has a defensive mismatch.

It’s not as if her presence has been felt solely in her point totals either. Walton finished fourth in the Pac-12 in steals with just more than two a night, and 15th in rebounds with six per game.

For those that have had their doubts about her longevity, Walton said she doesn’t let it get to her.

Barnes said this is the best she’s seen Walton feel, and the best she’s moved with her knees. As the team prepares to head to Indianapolis, she now gets the chance to raise her stock even further as she attempts to make the jump to the pro ranks.

It doesn’t hurt to get a bit of recognition from those that have already made their way to the pros, either.

“As a little girl, playing basketball, everybody says, ‘Well, what are you going to do,’” Walton said. “[The] WNBA. It’s automatic, you don’t think about school, you don’t think about anything else but playing professionally, and to get that kind of love and respect from players who are where I want to be is a great confidence booster.” 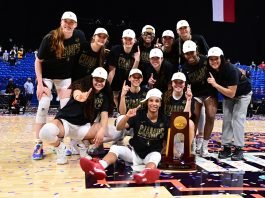 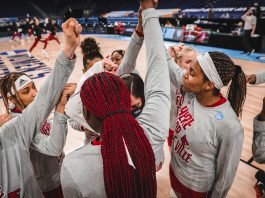 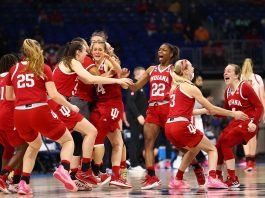 Indiana, Arizona are first-time dancers in the Elite 8