Last April, Joni Taylor was named head coach at Georgia after serving as assistant coach for four years, including the last three as associate head coach. She succeeds longtime coach Andy Landers, who was the only coach the program had ever had.

A Mississippi native, the former Joni Crenshaw played at Alabama. She had nine years of experience as an assistant coach, including stints at Troy, Louisiana Tech, Alabama and LSU, before coming to the Bulldogs.

Under her guidance, Georgia has begun the season 9-1.

Sue Favor: Congratulations on your new position as head coach of Georgia basketball. You’re only the second head coach the program has ever had. What is that experience like?

Joni Taylor: It’s surreal, and I am overwhelmingly grateful. The things that coach Landers was able to do at such a high level, and the success he created at such a high level have set the bar high. That the Georgia Athletics administration felt comfortable and confident enough to turn the program over to me is an honor, and I take it as a huge challenge. It will drive me to continue to build the program.

Sue Favor: What are the most important things you learned from coach Landers?

Joni Taylor: He was so prepared. There was never a situation for which he wasn’t prepared. Being in some of those situations with him helped me. I learned to not be quick to make decisions on or off the floor, because if you make a mistake, you can’t take that back. There’s nothing wrong with sitting on something while being full of knowledge.

Sue Favor: What did you encounter after becoming head coach that you didn’t anticipate?

Joni Taylor: Everyone says it’s not the basketball – it’s everything off the floor that takes up your time: the marketing, the speaking engagements, all take up your time. I wasn’t shocked, but it’s an adjustment. That’s where having a great staff is so important. They’ve got to speak your language and make decisions for you sometimes.

Sue Favor: What do you love about being a coach?

Joni Taylor: The chance to have a positive impact on the lives of young women. Basketball is the tool God gave me to do it. I love recruiting, I love training. I love seeing a freshman become a junior – I love that whole process.

Sue Favor: So you’re a teacher at heart.

Joni Taylor: Yes. My parents influenced me. They were both educators, and my Moms’s best friend was an AP English teacher. Saturday morning, when everyone else was watching cartoons, Miss Mabel Hoffman was sitting at our table talking to me about what was going on in the news.

My mom corrected my grammar all the time. She’d say, “it’s not ‘where you at?” it’s “where are you?” I was once grounded for two weeks for not knowing how to talk on the phone.

Sue Favor: Did you ever see yourself becoming a head coach? Did you ever think you would take over the reins at Georgia?

Joni Taylor: First of all, I didn’t see myself being a coach. I was going to be a high school counselor; I was going to teach two years and become a counselor. Then after I’d used up my eligibility at Alabama, I became a student assistant for a coach who asked me to work in his office; my responsibility was being a secretary. Gradually, he gave me more and more responsibility. I started helping with recruits and making calls to potential players. That’s where the coaching bug took hold of me.

Joni Taylor: Short term is to be best we can be every single day: play hard, execute offensively, and help in the community. It’s a privilege to wear the uniform and have a full scholarship. Long-term, we want to win a national championship. That’s one thing Georgia women’s basketball hasn’t done.

Joni Taylor: High energy, a lot of talking, a lot of communicating. Running up and down the floor. But we also have a lot of fun, and I’m not above making fun of myself. I’m serious but I believe in having fun too. When the girls see that we (coaches) are willing to put ourselves on the line, they appreciate it. These first games into our season, the girls have played their hearts out. They know I’d do the same thing for them.

Sue Favor: What is it about working with young people that you enjoy?

Joni Taylor: Seeing their growth, seeing the light bulb click on. It’s so obvious when that happens, and when they get it, whether it’s academics, basketball or community service.

Sue Favor: What do you do for your own workout?

Joni Taylor: I love working out. I’ve run half-marathons, but my favorite is a workout called blast, which is a combination of treadmill and circuit training. I love cardio and I don’t do weights much, because I bulk up fast. 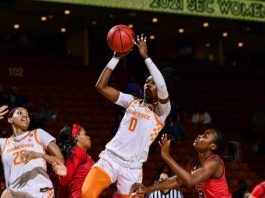 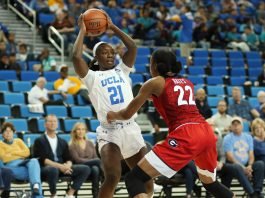