Kenny Brooks enters his 14th season this year as the head coach at James Madison University – his alma mater. Last February he became the program’s all-time most winning coach, and ended the season with another Colonial Athletic Association title and a trip to the NCAA Tournament.

A Virginia native, Brooks played for the Dukes under renowned coach “Lefty” Driesell. He began his coaching career at Virginia Military Academy before becoming an assistant coach for the JMU men’s team in 1998. Brooks accepted the same position on the women’s side in 2002, and that December was named interim head coach. The following March, he was named women’s head coach.

Brooks has been married 17 years and has four children.

JMU goes into this year without top scorer Precious Hall, who sustained an ACL tear in September.

Sue Favor: You’ve had such a strong run in your years as JMU head coach. To what do you attribute your success?

Kenny Brooks: Probably fear of failure. I’ve watched a lot of coaches build something, and I don’t know whether you want to call it complacency, but then they get to the top and they just kind of stop doing the little things. And doing it at my alma mater is special as well because everyone watched me play there, and you feel like you owe it to the people and the fans who helped me a lot.

We just continue to work. I put good people around me and let them do their jobs – let them coach. I think we do a really good job with the kids in identifying kids who will help us. Obviously we can’t go out and get McDonald’s All-Americans, but kids who we cna coach up. We get them in, and we always want them to improve and get better. We work tirelessly. We never do group workouts; we do individual workouts, because we always want to help kids at what they need to get better at individually. I think that’s been a big part of our success.

Sue Favor: What does it mean to you to coach at your alma mater?

Kenny Brooks: It means a lot. If you notice, my whole staff are also alums. It helps and it’s very unique. All of us give it our all, and we all have affection for James Madison in different ways. All of us have every nook and cranny of that campus covered. It’s a very special place; the environment is wonderful. You just consider it home.

Sue Favor: Some of the best head coaches weren’t necessarily the best players, but you did well for yourself when you were a JMU Duke. How did your playing days influence your coaching style? What did you learn from your own coach, Lefty Driesell?

Kenny Brooks: When I played for him I thought he was a little crazy. But I find myself coaching very similarly to how he coached me. It’s kind of like parenting: when you grow up you find yourself like them.

He taught me so much, and he still follows me. He’ll still call me every now and then and tell me he caught my game, and that’s a huge compliment. I get chills when he calls me. He’s influenced me tremendously.

My playing days influenced me. I was a point guard, and I just want to give them the opportunity to play. I want to put a good product out there that people want to see.

Sue Favor: How is coaching women different from coaching men?

Kenny Brooks: Night and day, Mars and Venus. I’ve had opportunities to go back to Mars, but there’s no way that I would.

Sue Favor: Why so?

Kenny Brooks: Because (with women), the game is in its purest form. I think the kids on the women’s side work so hard. To see our tradition blossom at James Madison – these kids deserve it – they work hard. They deserve to walk down and play in front of 3 or 4,000 people where it’s loud and exciting.

It’s a different game, I just enjoy the women’s game a lot more. In fact, I don’t even watch college men’s basketball. I coached on the men’s side for 10 years, and I switched over because I wanted to; not because I lost a job or was in search of a job. I was the top assistant for the James Madison men, and I switched over to be the top assistant on the women’s side; I made a lateral move. And it’s because I love the women’s game. It’s been a dream job for me ever since.

Sue Favor: When did you know you wanted to coach?

Kenny Brooks: Very early, when I was in college. Sheila Mormon was the head coach when I was in college, and after our practice was over everyone else would walk out, and I would sit and watch the women’s team. They were very successful, they won a lot, and I would watch. I saw the cameraderie, I saw the togetherness, I saw the “one more” passes. It’s just something I was always drawn to.

Sue Favor: What is your plan of attack or approach going into each season?

Kenny Brooks: This year we were derailed by the loss of Precious. I was very excited about our team. I thought we could have gained more national attention with Precious Hall. Her injury was a big blow, but the thing we’ve built with this program is to not feel sorry for ourselves and next one up. These kids have done a really good job with that. They know that Precious was a big, big cog to what we were trying to do, but they didn’t hang their heads when they knew she wasn’t going to be around. They realize we all have to step up into different roles.

Our goals are still the same. Today was a setback, but I learned something about each and every kid. In order to compete against teams like this, we’ve go to be a lot tougher. I honestly believe that we’re going to be a much better team at the end of the year than we are now.

Precious will come back as a fifth-year senior. She’ll graduate in May, on track. She’s ahead of schedule in her rehab, and she’s doing a good job of mentoring the kids. I’m very proud of her and what she’s done. She’ll come back and bridge the gap, because we’ll lose a lot this year. With her in the fold, I think we’ll be pretty good again.

Sue Favor: Why do you love to do what you do?

Kenny Brooks: Because I enjoy it. I mean, sometimes I have to pinch myself because this is work, so to speak. It’s a paycheck, but it’s not work at all. When you surround yourself with the type of kids that we have. It’s fun watching them grow. I always tell parents, “you’ve done a great job for 17 years, but I’m going to be the most influential person in their lives at this time. From 18-22 they’re getting to be who they will eventually become, and I have an important role in that. If I let them come out on the basketball floor and at school and let them do what they want to do, they’re not going to be ready for the world. But if I mold them and give them discipline, they’re going to understand that and be more successful in life.

Sue Favor: Do you ever want to coach anywhere else than JMU?

Kenny Brooks: I was kind of waiting to see if Byron Scott would lose his job, and if the Lakers called I would have to. I’d be interested in that. (Laughs) But you know what, you never say never. You always have to look and keep your ears open, but I’m very happy where I am. Could I retire there? Yeah. But if the Lakers called, I probably would come.

Sue Favor: What’s on your iPod?

Kenny Brooks: Oh my goodness, oh man. Earlier we were going to dinner and I had my headphones in and the kids asked what I was listening to: it was Mariah Carey’s “All I want for Christmas.” I’m a Christmas music nut – Ray Charles, whatever – I’ll listen to it in July.

But I also share music with my three daughters, so Justin Bieber pops up sometimes when I have it on shuffle. 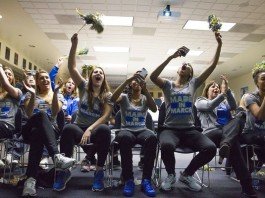 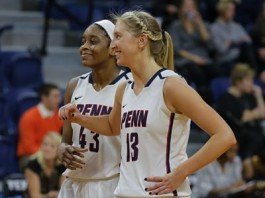 No buzz, but all the guts and glory