Earlier this month I checked out the infamous West Fourth League in Manhattan. I was happy to discover that it is the place where many athletes play who didn’t quite make the WNBA, as well as some current college stars.

The games were highly-competitive, as I’d always heard. The second game I watched featured a team that included former Buckeye Samantha Prahalis, past Red Stormer Shenneika Smith, and current Seton Hall star forward Tabatha Richardson-Smith. Watching these three and their teammates do their work was a real treat.

I wasn’t able to make it to Harlem to watch the Dyckman League, which is the other big street game in town. But the same day I was at West Fourth, basketball great Teresa Weatherspoon made an appearance at Dyckman. The following weekend, she stopped in at West Fourth.

New York City is too cool to have two women’s summer leagues. Los Angeles, where I am located, has NONE. Even the Bay Area in California is home to a thriving women’s Pro Am League. But I have discovered that the City of Angels is not much of a sports town.

If you’re lucky enough to be in the New York area, stop in to West Fourth or Dyckman some Saturday or Sunday. You never know who you might see on the court. 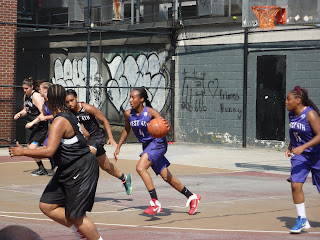 Game one that I attended featured purple vs. black-uniformed teams. Here’ the point guard for team purple takes the ball up court on the fast break. 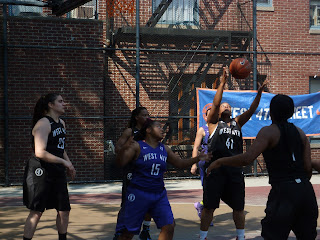 Games are played in a “cage,” i.e. a fenced-off area in mixed residential/business Manhattan. 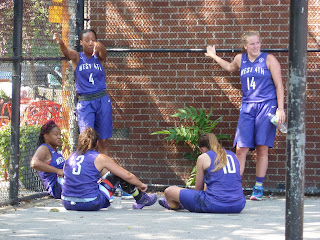 The purple team confers at halftime. Many teams are self-coached. 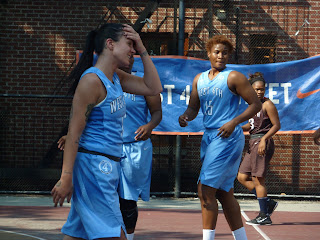 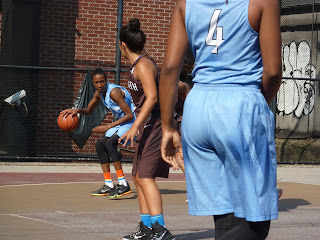 Former St. John’s stand out Shenneika Smith muscles the ball into the paint. 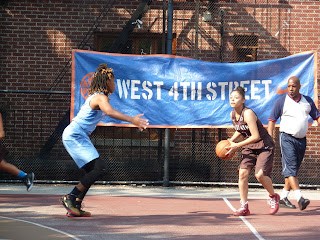 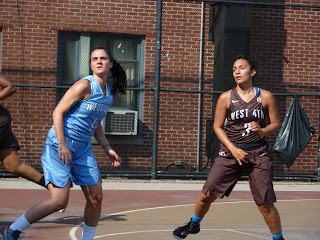 Prahalis keeps an eye on the ball. 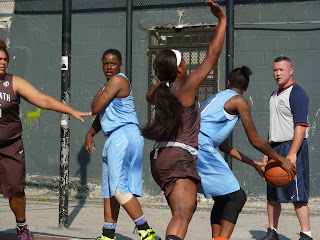 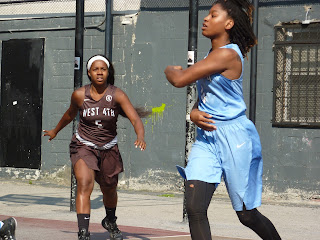 Richardson-Smith gets rid of the ball fast. 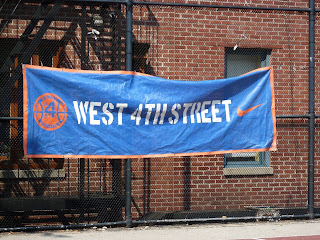 The high-energy West Fourth League has been drawing fans for years.