Tamika Catchings and Sue Bird were righteously paired up at today’s All-Star game for pre-game intros. Both saw their first season in the WNBA in 2002, and both have been with the same franchise their entire professional careers – Catchings with the Indiana Fever, and Bird with the Seattle Storm. Both athletes have lead those teams for 14 years, have won Olympic gold medals together, and have earned the respect of players, coaches and fans around the world.

Catchings has announced she will retire after the 2016 season. In a post-game interview today, Bird said she is “thinking about” retiring, but wasn’t sure when yet.

I know everyone has to step away at some point and do the rest of their lives, but when these two players leave basketball, it will be a sad day for all.

I love that they are both going out on top. Their influence on the game has been immeasurable. 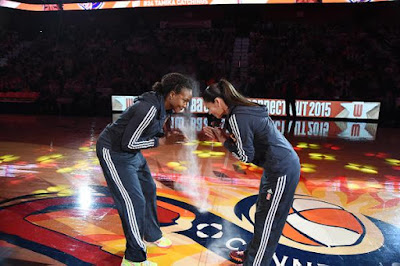