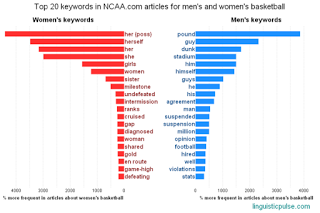 Interesting piece on differences in descriptive word usage by writers in covering the women’s and men’s game.

The writer counted the numbers of times certain words were used in writings about both women’s and men’s basketball, and assembled them on a graph. Predictably, men’s stories feature words related to penalties, and business of basketball, and the like. The number one word was “pound”; the weight of female players is rarely discussed. Tellingly, “diagnosed” was used in women’s stories often, and didn’t make the men’s list. 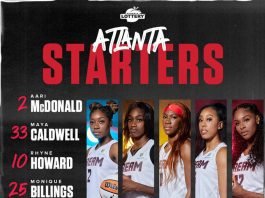