Expectations for the Los Angeles Sparks were high going into this season.

In February, none other than Magic Johnson bought the team, saving it from its demise. Then a complete all-star lineup was assembled that included both newcomers and team veterans. Suddenly, the Sparks were deeper than they’ve been in a decade, which was the last time they cut down Championship nets. Even fans of other teams had to admit: LA had a chance to win it all this year.

Sure, there have been the setbacks of losing Kristi Toliver for a few weeks while she plays for the Slovakian National Team, and Candice Wiggins for about a month recovering from meniscus surgery. But the Sparks’ slide into the cellar of the league has taken everyone off guard.

They’ve won only one game of their last seven and have, at this writing, dropped four straight. They are 3-7 for last place in the Western Conference. The only team doing worse currently – and that’s only because of their loss today – is the New York Liberty with a 3-9 record.

Just watch Los Angeles on the floor: they lack cohesion and focus. They start strong and are unable to sustain the momentum. Their defense is weak and their offense doesn’t seem to follow any direct plans. Player substitution plans are unfathomable. It’s plain to see why they’re losing.

“What’s wrong with the Sparks?” fans keep tweeting and texting me. Speculation on the rebkell message board has stretched out several pages worth on various threads.

It became obvious during last night’s butt-kicking by the Lynx that the problem likely stems from the top.

I was watching another part of the floor at the time, but two season ticket holders alerted me that Candace Parker had exchanged words with assistant coach Gail Goestenkors when she was taken out of the game. Pictures were posted on the Internet, which are below. 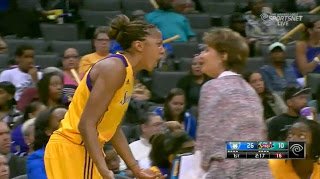 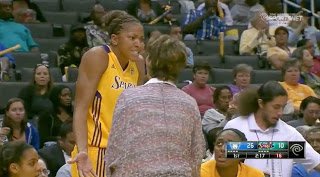 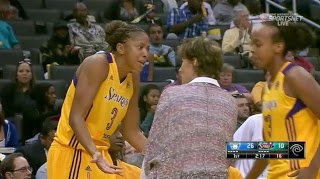 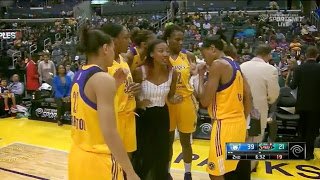 At the end of the first quarter of play in last night’s Lynx at Sparks game, Candace Parker reacted to something assistant coach Gail Goestenkors said. Later, in the second quarter, the injured Candice Wiggins came off the bench to speak to her teammates.

I’m not going to pretend to be privy to the relationships of the people in the above pictures, but one thing seems clear: there’s not a lot of respect there. And without togetherness on a team and healthy coach-player relations, there is nowhere to go but down.

It may be time for a coaching change for the Sparks. Carol Ross is a proven experienced and quality coach, and she’s a fantastic person. But she may not be the best fit for this team. There have been many cases where a coach isn’t successful with one team, but goes on to another and achieves mightily. This currently includes former Sparks coach Michael Cooper, who didn’t find success at USC but now has the Atlanta Dream at the top of the Eastern Conference standings.

The Sparks have struggled for years to find a quality coach that can lead them, which is why they’ve run through so many.

With the amount of talent Los Angeles has right now, there is absolutely no excuse for their poor performances of late. Other coaches have got far more out of far less personnel. Lynx coach Cheryl Reeve was playing with only nine earlier this season, as three players sat out with injuries, and the team began 7-0. In 2012 Lin Dunn coached the Indiana Fever to a championship without their second-leading scorer.

Magic Johnson, who has been to only one home game so far this year, and his partners owe it to Sparks fans – especially the ones who have been there since the WNBA’s opening game in 1997. They are upset and can barely stand to attend games right now.

A change needs to happen, and fast. But if Sparks management decides to find a new coach, there is one major problem: who would they get who is better than Ross? Most college coaches aren’t going to leave those secure positions to come to the unstable ranks of the pro coaching world. And what other long time WNBA coach isn’t already coaching a team?

Fact: having the two worst, most struggling teams in the WNBA be in the two largest markets hurts the league.

Something needs to happen on both coasts, but what? I would hate to be a team owner, president or general manager right now.