The WNBA veteran had planned on playing. But the first week in training camp with the New York Liberty, she injured her hip. The Liberty cut her shortly afterward.

Hoffman came home and picked up right where she left off: running youth basketball clinics with husband Ron Cass. And she’s extending even further with a post clinic next Saturday for college players. 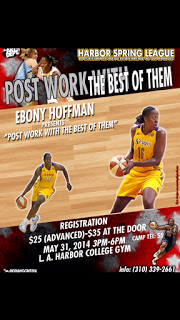 The need for skill development is acute, according to Hoffman, who said today’s high school and college players lack knowledge of the fundamentals of the game. There are several reasons for this.

Hoffman is of basketball pedigree, as a 2000 graduate of the storied Narbonne High School basketball program in Los Angeles. In those days, she explained, your AAU/summer basketball program and your high school team were one and the same. This helped the Gauchos dominate both the city and state basketball landscape for over a decade. Today, club ball teams are formed with players from everywhere – even out of state.

“Sometimes there are philosophical conflicts between high school and AAU coaches, and players don’t get a consistent message,” Hoffman said. “On AAU teams now, there is no individual development – it’s just all about the team practice.”

Hoffman became especially aware of how different the youth basketball landscape is today when Cass was hired as head coach at University High School in Los Angeles two years ago. The couple began to see evidence of a widespread skills deficit on a daily basis.

“For instance, they’ll be so into their one-on-one that they’ll forget their pivots,” Hoffman said. “Many kids can’t do both a left-handed and right-handed layup. They’ll settle for step-back three’s instead of going in and finishing the move.”

“Kids are either taught backward, or not taught at all.”

Hoffman and Cass began their skills clinics in December, on Saturday mornings at Narbonne. Now they have 40 regular attendees every week. Beginning June 7, the clinic will be 10 a.m.-noon Saturdays at Stephen White Middle School in Carson. This summer they plan to expand, and will offer clinics from 6-8 p.m. Mondays and Wednesdays at Laces High School, in addition to Saturdays.

“Our clinic is different because we get them thinking outside the box,” Hoffman said. “It’s different than your traditional camp-style clinic – we’re remixing that. Kids are never bored.”

If next weekend’s post clinic is successful, Hoffman may continue to work with college players regularly, as well.

“I’ve got ten years of professional basketball experience, and I’m happy to pass it on,” she said.