Fall sports are going full speed and the trees are starting to drop their leaves. AAU try outs are starting up and basketball coaches are winding down their summer schedules. College basketball players have put in a ton of work this summer both on the court and in the weight room, and as open gyms and preseason practices start up, they remain busy.

This time of year coaches typically start calling around to try to find out what others are doing for their “fitness test.” It feels like a right of passage when playing on a team to have to worry about how you are going to do on a day that really makes very little difference in the overall performance of an individual on game day, and certainly even less when considering all that goes on throughout a successful season.

Preparation is key to any successful coach, player, team, and season. Getting in basketball shape is imperative to any program across the country at this time of year. High school athletes are sometimes playing several sports, and are practicing and competing at a high level, both effort-wise and skill-wise. However, just because you can run up and down a soccer field, put in the miles during cross country, are able to stay low when playing defense during the field hockey game, the demands of basketball are unique.

Coaches can help themselves and their teams by developing a progressive approach to their basketball preseason, which involves conditioning, cutting, shooting, defensive positioning, jumping, landing, and many more variables. They must do this while holding the players accountable. How many sprints do you need to complete to “be ready”? How many shots do you need to take to be “clutch”? To be honest, no one really knows. But we do realize that there is a combination that needs to take place – a magic recipe if you will – to prepare the body for the demands of the game of basketball.

Here is one full court shooting workout that we use to incorporate communication, leadership, and accountability. Working in groups of three, this small unit of players has to compete until they make forty combined shots – roughly 80 points if you want to add a motivational twist. One player completes the workout described below, one person has to make two free throws (and we track made shots for bonus points. Every time two free throws are made in a row, it counts as a “one shot bonus” or “two points.” Missing either free throw equals zero bonus points). The third teammate has to rebound, pass, and inspire their teammate to achieve greatness.

Be sure to connect with STT here: 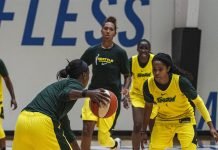 WUG team creams Mali in the first round