Long Beach, Calif. – The Storm outlasted the Sparks Sunday, 67-66, in the first exhibition for both teams.

Alysha Clark hit a jump shot with 4.6 seconds to go to put Seattle up by one, and the Sparks had a chance for one more play, but Farhiya Abdi over threw an inbounds pass, leaving no time for the shot as the clock expired.

There were 15 lead changes in the game – seven of which were in the fourth quarter. The Storm began the game aggressively, mounting a lead in the second quarter that they took into halftime, 40-33. In the third quarter, the Sparks caught up, and from then on it was neck and neck to the finish.

Both teams held out key players – Tanisha Wright for Seattle, and Alana Beard for Los Angeles – both of whom dressed for the game. The Sparks were missing Candace Parker, Kristi Toliver, Lindsay Harding and Jantel Lavender.

Each team also followed a pattern of starting their strongest lineups, and letting veterans play, in the first quarter and a half, and slowly easing them out of the action for the remainder of the contest. Players took turns at multiple positions.

Rookies on both sides impressed.

Second-year players Nneka Ogwumike for Los Angeles and Shekinna Stricklen for Seattle both played overseas this winter, and their improvement from their rookie seasons was apparent.

“I thought we did OK. I know LA didn’t have some of their key players out there. What I gauge on is, are you getting carryover from your practices? We’re getting carryover, and that’s a positive sign.

Every team this time of the year has tough decisions.

I thought our defense was pretty consistent, for the most part, was consistent from beginning to end. I thought we rebounded really well in the first half, and in the second half, we gave up a few too many offensive boards.

You don’t really have a strategy for preseason games. You just say four or five things and see if people can get those thing done, and for the most part, we did. Offensively I thought we did some good things. I don’t think either team shot the ball really well. But in the second half they came out and really pressured us, and it bothered us in the third quarter.

Two weeks from now, LA will look a bit different than they did today.

“We did get some results we wanted. First, we found out at halftime that they are coachable. We asked them to do things differently in the second half and I thought in the third quarter you saw a much different team. We fell in love with the outside shot in the first half, that’s a heartbreaker. We had to get control of the paint again, help our defense so we were ready to get a lot of deflections. Our hands were much more active in the third quarter and we were able to look at personnel, see how people play under the big lights.

It was an offensive lapse, in my opinion. When you jack up threes and don’t go deep into the shot clock, you give your defense no chance. We kept our defense in a bad position for the first half, especially the second quarter. I was looking to see can we make adjustments. They got an ear full at halftime and they made adjustments.”

The Sparks’ next preseason match up is May 19, when they face the Tulsa Shock. 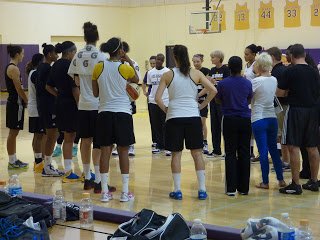 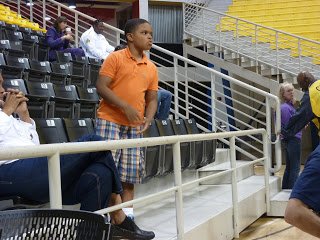 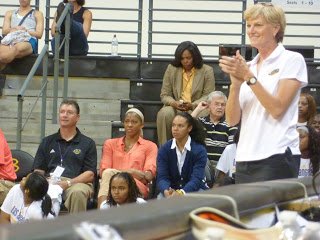 Candace Parker, left, and Kristi Toliver, returned to the team Sunday and sat at the end of the bench.