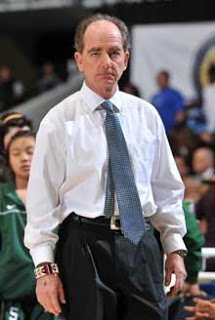 Two years after he left, Jeff Sink is returning to his head coach position at Brea Olinda.

Sink, a teacher at the school, spent 17 years at the helm of the program, where he collected 16 league championships, 10 CIF-Southern Section titles and four state championships. He resigned to coach the boy’s team and “try something new,” but he found that he missed his Ladycats very much. When Kim Cram-Torres resigned last month, Sink decided to return to his former job.

“It’s been really fun coaching the guys, but I’ve coached the girls for 17 years and I’m almost ready to retire,” Sink said. “I want to see what else we can do.”

“Kevin wants to play against us,” Sink said with a laugh.

Games between the two schools the past few years have been legendary, as both schools were nationally-ranked side-by-side in the top five for many seasons. The last two years, however, Brea Olinda has fallen off the map. That is something Sink hopes to change, beginning immediately.

Known for his intense ways during games, Sink stalked the sidelines. He yelled at players, assistant coaches and referees in between guzzles of Diet Coke, and he was as popular with fans as were his players. In one fierce home court rival game four years ago, the packed student section stood up and changed “Sink! Sink! Sink! Sink!”

“I love coaching girls,” Sink said. “They play so hard, and they want to learn.”