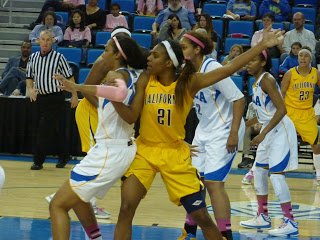 The Bruins didn’t necessarily look bad – it was just that the Bears looked so good. They out-shot, out-rebounded and out-stole their opponents, while forcing more turnovers. Cal looked confidence on both sides of the court.

My photo gallery, which includes the above picture.

Chiney Ogwumike headed up Stanford’s efforts in taking down USC, 79-55, with her 20th double-double of the season.

Washington State slipped by Oregon State on a last-second shot, 51-49.