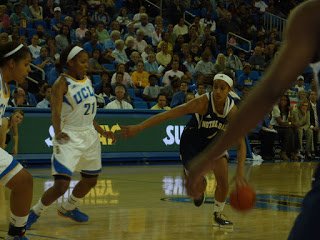 Skylar Diggins drives up the court in the second half. 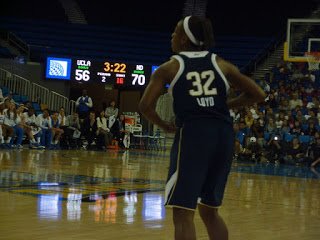 They began with suffocating defense and jumped out to a 6-0 lead before Notre Dame could return the favor. It wasn’t until late in the first half that the Irish seemed to wake up, and a 15-2 run finally put them ahead. They lead 36-29 at halftime.

Notre Dame began the second period on an 8-2 run, stretching the lead to 13. They maintained a comfortable cushion throughout the rest of the contest, despite tough play from the Bruins, who were missing key player Thea Lemberger.

My full photo gallery, including the two pictures above.

– UCLA senior guard Mariah Williams did a great job defending Notre Dame’s Skylar Diggins. Coaches of both teams acknowledged the effort to the Associated Press.
– Jewell Loyd made a big impression on me in the WBCA High School All-Star Game at the Final Four last April. She impressed me again today when she started, and was the top point-getter for the Irish. She is a complete player – does it all.
– The Bruins are a tough team. If they keep working and stay healthy, they could get to the NCAA tourney.
– The Irish are learning to cope with being a shorter team. They don’t have Devereaux Peters, and are noticeably shorter. But players are stepping up to fill the gap.
– The game was well-attended, including lots of green-clad Notre Dame fans. They were very polite.
– Musical artist/rapper Common was in the house to see Diggins and Notre Dame (see photo gallery). While he was waiting for the Irish to come out of the locker room post-game, fans were hitting him up for pictures and autographs. It was a humorous scene.
– Notre Dame is reportedly staying in town through tomorrow night so they can see their school’s football team play.