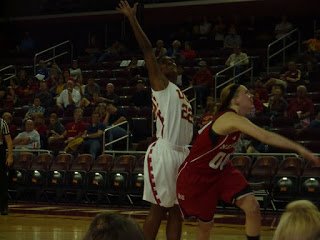 Destinie Gibbs tries to block the shot of Lindsey Moore 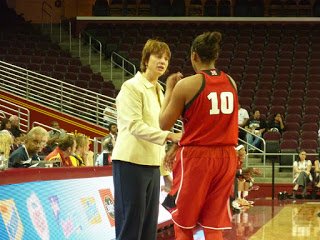 It was a game of runs, which Nebraska was only able to win in the last minute.

Ariya Crook lead USC, and all scorers, with 25 points. Lindsey Moore was the Husker’s top point-getter, with 23, and Jordan Hooper added 19.

My full photo gallery, including the pictures above.

Trojan Coach Michael Cooper credited what he called Nebraska’s poise, patience and discipline at the end of the game, which he said “is what finishers do.” His own team, he said, is still working on that.

“We’re not finishers,” he said. “Finishers make the plays that need to be made at the right times.”

But he is optimistic.

“We’re moving in that direction, and with practice we’ll get better,” he said.

The Trojans are also working on their defense, which Cooper said is a cornerstone of any elite team.