The UCLA Bruins pulled away in the second half of a sloppy game last night to beat visiting San Diego State, 66-52.

Markel Walker lead the Bruins with 15 points, while Alyssia Brewer added 12. Freshman Kari Korver had 11, which included a trio of three-point shots.

Erimma Amarikwa was the high point-getter for the Aztecs, with 14. Chelsea Hopkins put up 10 and Deajanae Scurry had eight.

There wasn’t much difference in the statistics for each team except for the shooting percentage: UCLA shot 40.3 on the night and SDSU shot 28.1.

Both teams had players out for the game.

SDSU has two key players out injured for another three or four weeks. UCLA’s Rhema Gardner and Lauren Holiday didn’t play for a second straight game, and Corrine Costa was dressed in street clothes. The Bruin athletic department has a policy of not discussing the injury status of players, so I don’t know what the deal is.

Bright spots for the Bruins are Walker, who is strong as ever, and Brewer, who sat out last year after transferring from Tennessee. Each played a solid game, and the entire team was poised and composed no matter what the score. Korver also shows much potential as a freshman with a deadly trey-shot.

Dixon, who sat out last year after tearing her Achilles tendon, still doesn’t look quite herself. Others on the bench will have to step up – especially when more than one player is out.

The Aztecs had a rough shooting night; it one was of those where there seemed to be a lid on the basket. But the fact that Amarikwa, a sophomore, and Scurry, a freshman, lead the scoring effort, is exciting. Scurry was one rebound short of her second double-double of the week.

Hopkins is invaluable to her team as a classic point guard. Not only does she do it all – scoring, assists and even rebounds – she is the boss. She takes players aside to talk to them (see below photo), knows exactly where the ball should be, and never comes out of the game.

Each team showed much potential, but both will have to step up from tip off instead of waiting until the second half of the game to really start playing. 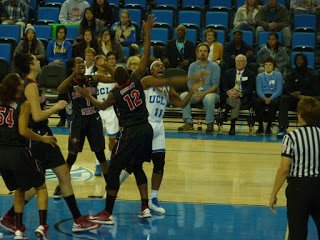 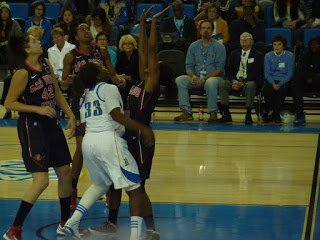 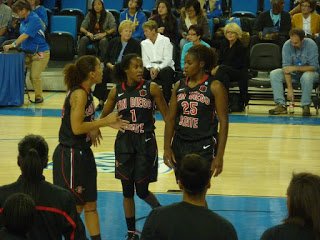 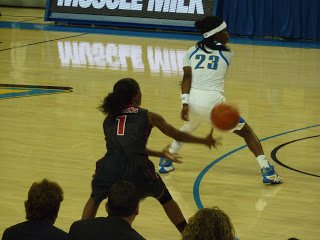