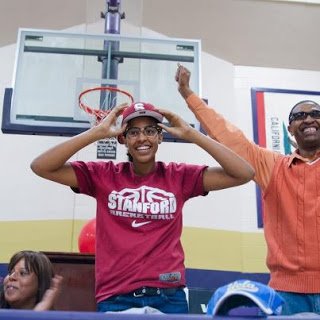 Erica McCall celebrates with her father Greg, right, at her signing announcement party earlier this evening. The eleventh-ranked player in the 2013 class chose Stanford over UConn and UCLA.

Class of 2013 #11 Erica McCall announced a few hours ago that she will sign with Stanford. The 6-foot-3 forward from Bakersfield, Calif. chose the Cardinal over UConn and UCLA.

Though she is excited about her decision, McCall said it was a hard choice to make.

“It was very difficult – all are great schools,” she said. “But what made Stanford stand out was the combination of great academics and great athletics. Not to mention the chance to play for Tara VanDerveer, who is a coaching great.”

McCall said another strong pull toward the Cardinal was that the school is relatively close to her home.

“It’s nice to think that I won’t be that far away from my family,” she said.

Though her father Greg McCall is head coach at Cal State Bakersfield, McCall said he will try to make games when he can. She suspects some of her high school teammates and friends will, too.

“They were preparing for me possibly going away to college far away, to the point where some were teary-eyed,” she said. “They were happy I picked Stanford.”

McCall first turned heads in 2010, when she played a prominent role in helping club ball team the Cal Sparks win a FILA National Championship within a month of joining the team.

Last year she was a member of USA Basketball’s gold medal-winning U16 team, and this past summer she achieved the same goal with the U17 squad. Additionally, she was part of the U18 3X3 team, which won a gold in September.

Both of McCall’s parents were athletes and her sister, DeWanna Bonner, is one of the WNBA’s top players. But McCall said there is more to the story than possibly good genetics.

McCall plays for Ridgeview High School, where she averaged 25.8 points, 16.7 rebounds and 7.1 blocks per game last year, as she lead the team to a league championship.