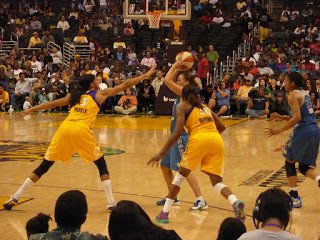 Taking a commanding lead from the tip off, Los Angeles didn’t allow the visitors to score until almost two minutes into the game. They never trailed and lead by as much as 21 points.

Candace Parker and Nneka Ogwumike each had 22 points and 11 rebounds; Parker also had five assists and four steals. Monica Wright lead the Lynx with 19 points, which rookie Devereaux Peters had 17 points and 13 rebounds.

– The Lynx were without point guard Lindsay Whalen, who was sick. Maybe that’s the reason they looked lethargic from the jump.

The Sparks, on the other hand, were hyped beyond belief. They started on a 6-0 run – the last two points of which were scored on a Nneka Ogwumike mid-air, one-handed put back. The crowd went insane, and maintained the energy throughout the game. The excitement at Staples Center was palpable.

– The #1 Western Conference-seeded Lynx didn’t seem to care that they lost, but for the #2 Sparks, it sure mattered to them that they won. They needed it mentally more than anything else. See Carol Ross and Candace Parker quotes below.

– Early in the game, referee Jeff Wooten declined to call a foul on Monica Wright after she hacked Alana Beard, sending the Sparks guard to the ground. Beard got up and was so angry she took a step toward the ref, but Kristi Toliver put her hand on her shoulder and walked her the other way.

– Candace Parker was so hyped that, during the second quarter as she was taking a break, she stood up and started yelling encouragement and instructions at her teammates.

Parker was also irritated by the Sparks’ slow play in the second half, and she showed her displeasure. Then she took on a few extra duties as needed, like dribbling the ball all the way up the court a few times. She does it all.

– Devereaux Peters has been on fire since a group from Notre Dame came to Indianapolis last week to see her play.

– Both the UCLA and USC women’s basketball teams were in the lobby greeting fans as they arrived to the game, passing out schedules. Both teams were introduced (separately) during game timeouts.

– Parker and Ogwumike matched each other for points and rebounds. Oddly enough, they also each had 10 points at the end of the first quarter. And numerically, it was Parker’s 18th double-double of the season, and Ogwumike’s ninth. Hmmmm.

Which is a good time to mention this: at the last game, the Sparks put up a picture on the big screen during a timeout of Parker AND Ogwumike. Since Lisa Leslie retired, it’s just been Candace’s picture. But this rookie is no joke, so it looks like it will be a shared venture now…..

The Ross and Parker quotes are from me; the Lynx quotes are courtesy of Sparks staff.

“I challenged the team to come out and swing first and see what happens. We were able to really establish ourselves in an aggressive fashion, and it just set a tone.
We wanted to slam the door emphatically on the regular season and make a statement.
Nneka’s got a little more power, Candace is more finesse, so it’s a good 1-2 punch.
We’ve gotta get better on both ends – we can’t stay where we are and keep playing very long. We’re in a good place, but the playoffs aren’t built for good – they’re built for great. We’re not great yet. We’ve knocked on the door of greatness a few times, but we keep slamming our finger in it. …..We need to find the ability to play that way for 40 minutes.”

“We knew that this was a team that we’d possibly have to go through to win a championship, so I think everybody laid it out on the court and played with a lot of energy. It’s our last regular season game so we needed to wrap it up and make a statement.”

“I’ve sat at home the last four seasons, and to be honest with you, it sucks. But it prepares me for these things, for these moments.”

We get complacent – all of us do – we relax, we don’t play defense as well, we turn the ball over, we don’t take good shots, we don’t rotate it after someone’s touched it. We can’t have spurts like that; if we’re going to be a championship team we’ve got to stay focused and not pay attention to what the score is. When we were up 11-2 we should have been thinking we were down 2-11. We were stuck on 35 for a long time. You can’t have spurts like that; you can’t win a championship like that, plain and simple.

On the play of the Sparks

“We didn’t play very well, we didn’t defend. They came out and they did what they wanted. Parker and Ogwumike played great, and we provided very low resistance to what they were doing. We couldn’t make a shot at times. They got separated early on, and we played behind the whole time, and we couldn’t catch up.”

On the mindset going into playoffs

On playing against Candace Parker

”She’s a tough guard for other people because of her height and her size. She can shoot from anywhere, she can handle the ball. She is a lethal weapon. Its difficult for any team. We havent found anyone to stop her, but God bless a team that can. I hope to see them in the Western Conference.”