The Sparks easily put away the Fever last night, 79-69. 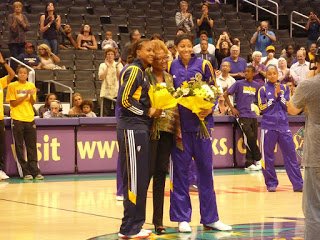 Prior to the game, the Sparks honored Olympians Tamika Catchings and Candace Parker. Team owner Paula Madison, above, presented them both with flowers. 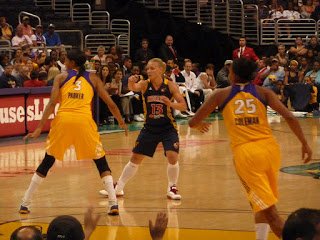 Erin Phillips passes the ball for the Fever in the second half.

• The Fever’s first and only lead came in the opening minutes, as Indiana led Los Angeles 3-2.
• With 4:07 remaining in the first, the Sparks jumped out to a commanding 18-3 lead.
• The Fever converted one two-point field goal in the first quarter.
• In the opening quarter, Kristi Toliver and Nneka Ogwumike combined for 15 points, seven rebounds, two steals, one assist and one block.
• Fever forward Tamika Catching was limited to 16 points on 7-19 shooting.
• Through the first half, the Sparks were shooting 57.7 percent, while holding to the Fever to 30.6 percent shooting.
• Each Sparks starter scored in double figures Tuesday night.
• Fever forward Katie Douglas scored 11 third-quarter points to pull Indiana within seven points with one period to play.
• The Sparks defense recorded 10 blocked shots, while limiting the Fever to 34.2 percent shooting.
• Inside the paint, Los Angeles outscored Indiana 38-26.
• Ogwumike recorded the seventh double-double of her season/career thanks in part to five offensive rebounds against the Fever.
• As a team, the Sparks converted seven of 10 second-chance opportunities. Although the Fever grabbed seven more offensive rebounds than the Sparks, they could only score three more second-chance points.

On the play of Candace Parker…

“It’s never easy when there’s two or three people hanging on Candace everywhere she goes, but that’s the case most of the time. We get caught trying to force it in there more than I would like. The great thing about Parker is that she can get the ball in a lot of different spots. She’s not the kind of player who will sit and wait to get the ball. She’s good enough to get her own touches.”

On the Olympic Break…

“We worked on fundamentals. We’re always going to work on defense and do that consistently. The energy and intensity came back to STAPLES tonight, largely because we came out very flat and unfocused in Seattle last game. We stepped up big tonight.”

“We have to set the tone right away. We have to do a better job of holding onto leads for sure. Everyone came in and contributed well. We’re a good team, and it’s going to take us a couple weeks to get back and get everybody acclimated.”

On the Olympic break…

“This break, we really gained more chemistry together. With the way the first half went, it was game after game and we didn’t have time to work on much. This month off helped us tremendously by working on offense and defense, and knowing each other’s strengths. We have the type of team where we can play against anyone.”

On the start of the game…

“First off, we didn’t start off the game the right way. We started out so lethargic, not near enough energy to match the energy they had in their first game back from the Olympic break. We dug ourselves a hole early, and then we had to spend the whole second half coming back. I give the Sparks a lot of credit. They are awfully good at home, and if we had brought the energy and the intensity in the first quarter that we brought in the second and third, we would be in the game.”

On the rest of the road trip…

Hopefully we’ll shoot a little better. When you’re on the road, and you only shoot 34 percent, it’s going to be tough. We also have to defend a lot better. We rebounded better than the first time we played them. We have to do the little things better like finishing layups around the basket.”

On coming off the Olympic break…

“We’ve been fortunate enough, or not fortunate enough, to have two games at home right when we got back (Thurs & Sat). It’s one of those things where you have to make that shift fast, especially when your emotions are so high. When I think about the ride that we had in the Olympics, and now being back with my teammates, just knowing that they worked so hard over the break, I’m excited to be back on the court with them.”

On playing with Candace for Team USA…

“It’s all in fun, especially for Candace and I. We had a friendship beyond that, way before she got to the WNBA, so kind of like the little sister I have. For us, we always have a good time, but obviously it’s a lot better when you’re on the same team rather than going against each other.”