Ex-Tennessee players have long told stories about legendary Coach Pat Summitt staying in their heads at times during games. Not only do they hear her actual voice once in a while, but her philosophies are so engrained in them that they come as automatically as breathing. This was glaringly apparent during last night’s Fever vs. Sparks game in Los Angeles.

Indiana forward Tamika Catchings and Sparks forwards Candace Parker and Nicky Anosike all played for Summitt as Lady Vols, and all demonstrated her commitment to defense during the contest over and over.

Summitt’s “four back” stipulation when a rebound is collected always meant that her players better be the first ones back up the court after a board. Last night they always were, as can be seen in the pictures below.

It is a tribute to Summitt that even numerous years after their college days, that her former Lady Vols still practice the defensive urgency she taught them. 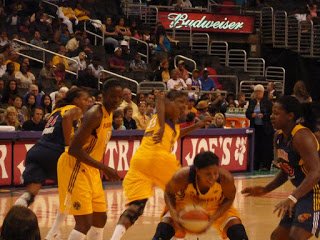 Candace Parker has just got the defensive rebound in the first quarter, and fellow ex-Vols Tamika Catchings and Nicky Anosike are the only two players who are already on their way down the court. 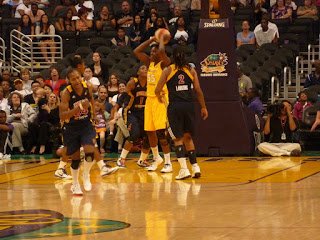 In the last period, Anosike pulls the board, and Catchings is again first back on defense.