Participants were welcomed and then guided through warm ups by the players. After that they were broken up into three different stations, facilitated by each member of the Sparks. Lewis focused on passing and dribbling, Toliver on shooting form, and Ogwumike on rebounding. Kids rotated between stations.

Participants had a lot of questions and enthusiasm – some of which made for amusing moments. Ogwumike, unsurprisingly, was very comfortable as the teacher, while Toliver was more soft-spoken. Lewis, who I’d never heard speak before, had plenty to say and much to yell enthusiastically about.

After the skills training, Toliver and Ogwumike answered questions and signed autographs.

The Sparks will host two more clinics – one tonight, and one tomorrow. See schedule below. 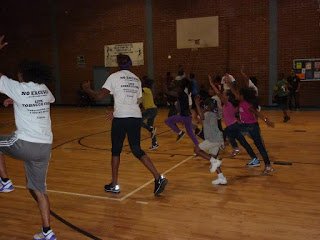 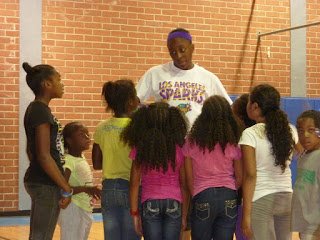 Ogwumike explains to her group what they are about to do. 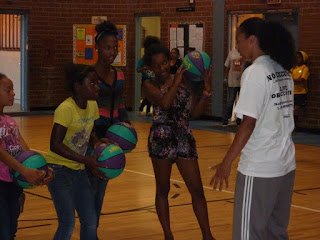 Toliver has a word with her charges before they start. 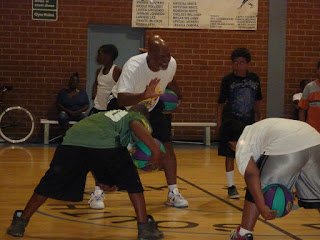 Los Angeles – The Los Angeles Sparks will be at four Summer Night Lights sites in Los Angeles August 1-4 teaching both basketball and life skills. Players and coaches will be partnering with the SNL program for a second year to create a safe environment at local parks that are most impacted by gang violence.

“We look forward to once again working with the City of Los Angeles in this valuable program,” Sparks President Mike Levy said. “We see this event as a great opportunity for local youth to interact with positive role models.”

Summer Night Lights, a program offered by the City of Los Angeles, aims to create safe environments during peak hours of gang related violence, and includes expanded programming and activities free of charge. SNL programming is held from 7:00PM to midnight, four nights a week during the summer months in 32 communities throughout the city.

The Sparks will appear at four clinics this August and players will have the chance to share some fun on the basketball court before sharing their own inspirational stories with teens. They will be volunteering the following days:

The Sparks hope to be a positive influence throughout the week while creating a safe environment for local teens. Not only will the clinics provide a fun and enjoyable time of basketball, but will also attempt to set better trends in the city of Los Angeles as a whole.

ABOUT SUMMER NIGHT LIGHTS
Summer Night Lights is a violence reduction strategy that extends park hours until midnight–during the peak hours for gang related violence–and offers youth and adult-centered athletic, recreational, educational and artistic activities. By empowering communities and targeting the traditionally most-violent summer months, Summer Night Lights has become a national model for violence reduction. Since 2008, SNL has expanded from 8 parks to 32 citywide, leading to a 35% reduction in gang-related part 1 crime in SNL neighborhoods in 2011.