So Cal Magic Black showed heart and hustle, but they were no match for the loaded Cal Sparks Gold team. Gold guard Courtney Jaco, known for her three-point shot, was on fire from the jump ball, and had four NBA-range treys to lead the team in scoring.

The Chinese National Team came close to beating their opponents, but the Style stepped it up a few notches in the last few minutes of the game to close out the win. Before that, scoring was neck and neck the whole way, with China having the momentum most of the time.

Tournament director Michael T. White said the Chinese National Team contacted him about being in the tournament, similar to the way the boys team from China did eight years ago. The country is seeing increased interest in the sport, and as a result, all of their national teams are getting more competitive.

I especially enjoyed one moment of the game, when a Chinese player was trying to inbound the ball. As sometimes happens, no teammate was in sight. She yelled “sa!” (or something like that). No one came. She yelled louder: “sasasa!”

I had to smile. It’s the same in any language: get your butt over here and get this ball.

A few pictures from these games are below. 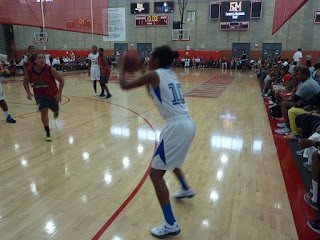 Cal Sparks Gold guard Courtney Jaco can shoot threes. She had four in Tuesday’s first game, including the one pictured above. She shoots them far beyond the arc. 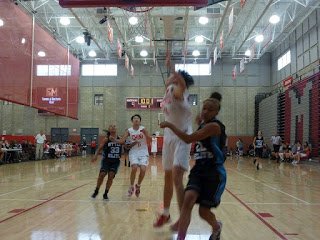 Chinese National Team player scores over Rotary Style in the first half of Tuesday’s game. 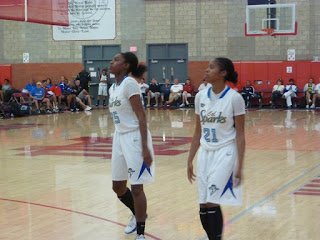 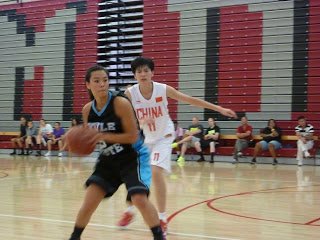 Rotary Style player tries to keep the ball away from the China team.

The JBS teams, from the Sacramento area, are extremely well-coached by Sean Chambers and his staff. And they gave Gold a scare in the first half when they took a 10-point lead. But Gold clawed back and only trailed two at the break, and stepped it up in the second half to win. Courtney Jaco lead Gold with 16 points.

These Northern and Southern California teams joined forces earlier this year to form a powerful alliance. But even though they are as one, they sure have fun playing each other. It’s kind of like wrestling with your kid brother: you just go hard. Lots of spirited play on both sides, which made for a fun game.

Today another NorCal-SoCal matchup went down, and the troops from another Northern team lead cheers for their friends in the game. It was pretty funny.