The University of Louisville mounted an advertisement on a billboard recently in Springfield, Ore. It is one of a few ads that take turns flashing by on the electronic marquee, and it features pictures of two athletes on the women’s basketball team: Shoni Schimmel, who is from Oregon, and Bria Smith, who hails from New York. The message reads, “Louisville basketball supports its athletes from coast to coast.”

Tammy Hill said the sign seems to be aimed at her family, as her daughter Mercedes Russell is the top recruit in the 2013 class. Louisville is among the schools Russell is still considering as she goes into the July recruiting period, after narrowing down her list from hundreds of choices.

“One can only assume, since the sign is along a highway that is an exit away from our house, and an exit away from Springfield High School,” Hill said. “For creativity, I have to give them credit. I’ve never seen that approach before.”

Hill said it is hard to take a picture of the sign because of its location, but added that it is very bright.

Russell has taken a few unofficial visits to colleges so far. She will use all five of her official visits this fall, Hill said, and will make her college decision prior to the beginning of high school basketball season.

“She just wants to enjoy her senior season, without all the pressure,” Hill said.

Russell ascended to prominence in the spring of 2011, when she capped off a strong season by leading her Springfield Millers team to a state title. Last summer she played with the USA Basketball U16 team, which won a gold medal. This past season Russell averaged 28 points and 15 rebounds per game and lead the Millers to a repeat title. In August Russell will play with the U17 team in the world championships. 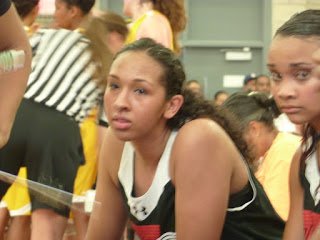 Mercedes Russell at a Mater Dei High School tournament this past April.