Last May, Springfield, Ore. center Mercedes Russell showed up to the West Coast Premier Invitational in Pomona, Calif. a little-known figure outside of her home state, where she and her high school team had just won a state championship. At that event, and subsequent club ball tournaments that summer, Russell made a name for herself. Her star really took off.

Today at the Michael T. White Tournament of Champions, Los Angeles, I caught up with Russell, who is here this weekend with top-ranked Team Concept. We talked about her whirlwind year, which was capped by a second state title last month.

Since she had to narrow her list to 10 schools, how many letters of interest did she get from colleges?

“Oh, so many,” Russell said, shaking her head.

She has taken unofficial visits to Tennessee, Louisville and Kentucky, but is keeping her options open at this point. She said she has a vision for the type of school where she’d like to play.

“I’d like to play in front of big, enthusiastic crowds,” Russell said.

She is still 6-foot-5, but is more muscular and thus a more intimidating presence in the paint. Russell is also notably more confident and well-spoken. On the court she has bolstered her skills, and averaged almost 30 points a game this season.

The next major tournament for Team Concept this season is the End of the Trail Tournament in early July.

“I think what I’ve improved most about my game this year is my moves and my footwork,” she said. 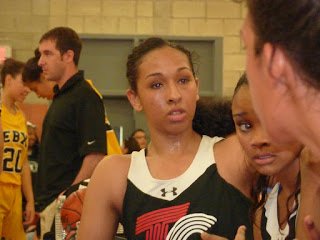 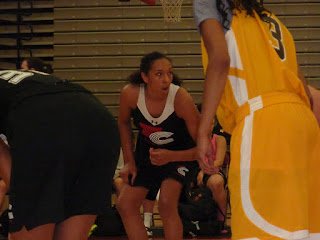 Russell prepares to box out on a free throw.