The game that appeared to be the most competitive turned out to be the closest game of the day: Brea Olinda vs Troy. Brea is coached this year by Kim Cram-Torres, who came from Villa Park High School. She replaced longtime coach Jeff Sink, who now coaches the Brea boys team. Troy is coached by Roger Anderson.

The one thing that is noticably different from past Brea teams is their size. Without Justine Hartman, Jeanir Olekumi, Amanda Arter and Amber Van Deudekom, the Ladycats not nearly as big as they were over the past four seasons. Brea still has three exceptional players in Anna Kim, Keitra Wallace and Taylor Spears, and all three played strong games yesterday.

Troy is led by Gabby Hanson, Shelby Dougherty, and Alicia Dimas. Hanson and Dougherty played well for Troy while Dimas was in foul trouble early in the game and only saw limited action. The game started out strong for Brea as they led 10-2 in the first quarter, Brea extended their lead to 24-12 in the second, and led 34-25 at halftime. At the end of three quarters Brea led 46-31, and it appeared not to be Troy’s night. However, the fourth quarter saw Troy storm back to trail by two points at 53-51, with 27 seconds left on the clock. Troy had two or three chances to tie the game during that period, but couldn’t get their shots to fall. Brea won 53-51.

The other games saw Rosary defeat Mayfair 50-39; Yorba Linda beat Santa Margarita 55-33; Mater Dei defeated Canyon of Anaheim 63-27, and both Jordan Adams and Nirra Fields played strong games. The final girls game saw host Orange Lutheran stomp the Santa Monica Vikings, 64-36. Orange Lutheran plays very good “team” game under current coach Tom Howard as they did under Tony Matson. They may not be the most talented team in the area, but every time I see them play, they always work the ball for the open player. Tony would be very proud of them.

There were several college coaches or assistants at the event, including coaches from UCLA, USC, UC Davis, Santa Clara, USD, and a couple of Juco coaches from Orange Coast College and Santa Ana College. There were also several high school coaches and players from teams not playing, which I thought showed great support for a good cause.

The box scores can be found on the OC Register web site: http://www.ocvarsity.com/sections/schedules/?sportID=3&gender=G 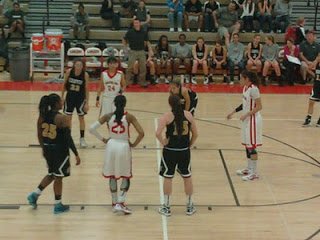 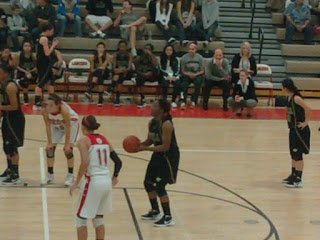 Brea’s Taylor Spears, at the foul line, Anna Kim behind the arc, and Keitra Wallace, on the left of the picture, all had strong games for the Ladycats. Troy’s Gabby Hanson, #11 in white, also played well. 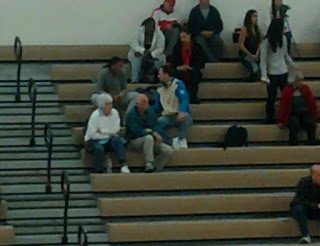 UCLA assistant coach Tony Newnan, in the blue and gold jacket, chats with Nirra Fields after the game. 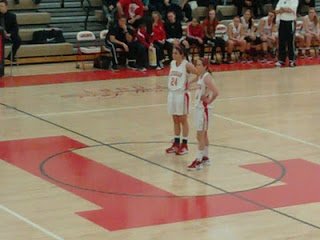 Orange Lutheran’s Abbey Goodsell, (#24) scored 18 points to lead all scorers in their rout of Santa Monica.


All pictures by IM in OC.