Today’s Southern California Pac-12 showdown was every bit the bloodbath battle fans expected it to be. The Trojans got off to an early lead and kept the lead at eight for a while, midway through the first half. The Bruins then went on an 8-0 run and tied things up at the 6:14 mark. They were up by four points before USC went on a run of their own, and took the lead back 26-25 at the half.

UCLA took the lead back to start the second period, pushing it to four again, 34-30. But the Trojans put up four points, and then the score remained knotted at 34 for seven minutes before USC was again able to score. The Bruins didn’t put up a field goal for over nine minutes. Crucial free throws by Trojan forward Cassie Harberts in the game’s final minutes sealed the win for her team.

Corral’s eight assists pushed her past Cheryl Miller on the all-time assists list. She is an underrated player, to be sure.

The game was one of the best defensive battles I’ve seen in a while. Both teams kept each other out of the paint and forced outside shots, which no one was making in the second half, as USC shot 18.2 percent and UCLA, 24 percent. The game was also predictably physical, with much wrestling for the ball, hand-checking and numerous fouls.

Some game photos are blow, but the entire game album is HERE. 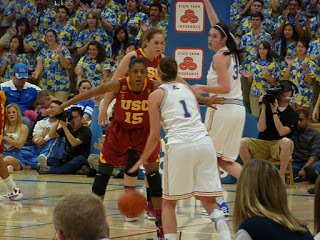 Thea Lemberger contemplates getting past Briana Gilbreath in the second half. 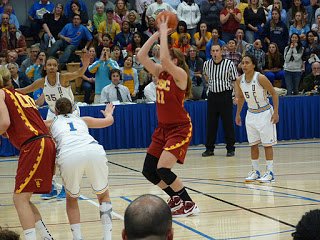 Cassie Harberts’ free throws in the final minute sealed the win for the Trojans. 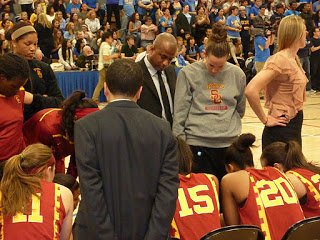