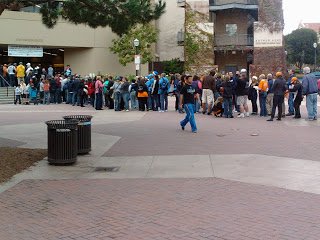 The line to get into the John Wooden Center extended far to the right of this shot, around IM in OC, who took the picture, and then snaked to the left.

My numerous photos of this great game and exciting day are HERE, so feel free to consult them as I narrate.

The sold-out crowd showed up an hour or more before the game to stand in line at the small John Wooden Center. There were a lot of UCLA fans, but there were more orange-wearing people than blue-wearing. I didn’t know there were that many Lady Vol fans in Los Angeles. And they donned all kinds of Tennessee gear, from T-shirts to sweatshirts to hats to orange “we back Pat” shirts.

They were a little late opening the doors for us, but once they finally did, the crowd flowed smoothly into the arena. We got to see both teams stretch and then warm up. As in 2007, when Tennessee played UCLA here before, the Vols greatly out-sized the home team in height and stature.

When Coach Pat Summitt walked in, the crowd stood and applauded. She smiled and gave them a “thumbs up” sign.

The Bruins began the game attacking on defense, but it did them no good as the Vols made 18 of their first 20 shots. Eventually they missed a few more, but still ended up shooting 76 percent for the first half.

Tennessee’s only fault was that their defense wasn’t up to its usual snuff. Associate head coach Holly Warlick had been leading timeout talks, as she has done since the beginning of the season. At a 14:11 timeout, ahead 17-8, Warlick had assistants Mickie DeMoss and Dean Lockwood in discussion when Summitt whirled around to the team and yelled at them for a few sentences. It was nice to see; just like old times.

UCLA never gave up. They cut the lead to 24-20 at 10:34 in the first half. Tennessee went on a run to go up by 16 with just under six minutes to play, but the Bruins fought back and narrowed the gap to 34-45 at the break. Junior Rebekah Gardner was especially impressive, putting up a career-high 24 points, including 15 in the first half. They played hard until the final buzzer – a respectable showing.

The Vols missed their last shot before halftime, following a sloppy offensive stanza. As the buzzer sounded, Summitt turned around to UT media relations wizard Debby Jennings and said “ugly.” So you know what happened at halftime. And predictably, Tennessee came out swinging, and went on a 9-2 run to pull away for good. The closest the Bruins were able to get was 13 points with 15:50 to play.

Meighan Simmons lead the Vols with 18, while Glory Johnson added 17, Vicki Baugh and Taber Spani each 14, and Shekinna Stricklen put up 11. After Gardner for the Bruins, Markel Walker and Thea Lemberger each added 11 and Antonye Nyingifa had 10, before going down late in the game and not returning. She emerged afterwards on crutches with an ice bag on her knee. No word yet on the UCLA website as to the extent of her injury.

Game story from the Associated Press.

– I sat right behind the bench. Heaven.

– Stricklen seemed to be feeling sick late in the first half. She was taken into the locker room, where she stayed, but she came back to start the second half and jumped right in.

– The Tennessee entourage is pretty amazing. There are four coaches, the media relations rep, the director of basketball operations, the athletic trainer, the strength coach, the radio guy, and three young assorted water/walk-you-to-the-locker-room attendants. They also come with two stools (see photos) and several big bags worth of game stuff.

– Baugh is incredibly poised on court. She has grown a lot the last few years.

– The Vols have defensive plays with hand signals the same as all teams do with offense. They are really serious about their D. And they talk to each other on defense a lot, as well as scream at their opponents. Johnson is particularly good at the latter.

– I’m still getting used to associate coach Holly Warlick conducting timeouts. She’s excellent at it – don’t get me wrong. It’s just something I and the University of Tennessee have never seen before: someone else leading the huddle for the Lady Vols besides Summitt.

– I’m really proud of UCLA. They’re out there playing their asses off, and they’re doing better than fans expected them to do. They have a lot of heart, a lot of will, and they play together as a team. They’re doing a hell of a job considering the teammates they’re missing, and next year once those bigs are back, the Bruins will be major contenders again.

– Summitt and assistant coach Mickie DeMoss came out after the game to do the post-game interview with the Tennessee radio guy (who is very nice, by the way). Fans completely circled the area and everyone pulled out cameras; it was so Hollywood. Then when Summitt got up she was mobbed by autograph-seeking fans, who she generously obliged until the director of basketball operations began shutting it down and guiding Summitt toward the door. I talked to her for a moment myself, which made my entire year.

– I think one of the major reasons Tennessee has been so successful over the years is that the team and staff operate like a family. It’s really apparent sitting behind them and watching them interact.