Pictures and story by IM in OC

It was not a good shooting game for CSF, as they shot 32 percent and only 21 percent in the second half. Sophomore Alex Thomas led all scorers with 18 points, while freshman Tailer Butler (Narbonne High School) had 11 points in her college debut, including three three-pointers. Butler still has the nice shooting touch I remember from seeing her in high school playoffs.

Freshman Chelsea Hill (Gilroy High School) led Biola with 16 points, and sophomore Adijat Adams had a double-double with 10 points and 14 rebounds. I was impressed with both Hill and Adams for Biola. I think both could make it a D1 mid-major. 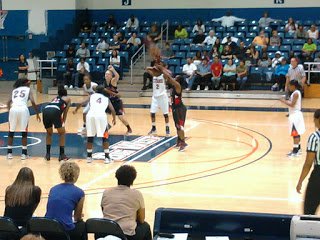 Biola shoots a free throw in the first half. They took an early 11-2 lead before Fullteron rallied and caught up. 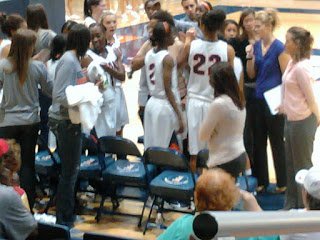 The Titans during a second half timeout.