Los Angeles basketball trainer Sherrise Smith runs The League: a women’s basketball league in West Los Angeles. It is direct – and great – competition to the Say No Classic.

I checked it out again last Thursday and saw three great games. Then I sat down with Sherrise to get some details about The League.

SF: When (what year) did you start The League?

SS: The League was founded in 2008 at the HAX in Hawthorne CA

SF: What was the impetus behind starting it?

SS: As the Director of Womens Basketball at HAX, one of my duties was to establish an elite competative women’s summer league for International pro athletes and some of the top collegiate players. In its inaugural year, The League was comprised of eight teams of eight players each. LMU, UCLA, USC, Penn State, and Cal State Fullerton were a few of the teams involved. We had notable participants, such as current WNBA player Noelle Quinn, and then-WNBA player Willnette Crocket (in limited games due to the start of the WNBA season).

SF: What is the age range of the players? Are most of them in college?

SS: Players range from 17 (incoming high school freshman) to former and international pro women – the oldest being 37. I would say that a it is a fair mix of former players/pro players and collegiate participants. The great majority of the players are from D1 schools, and this year we have UCSD, and San Francisco State that are participating as teams.

SF: Who are the coaches and how are teams formed?

SS: In an effort to create rivalries and keep the summer league fun, players or coaches are allowed to form their own teams. Or, I organize individual sign-ups and place them on teams, and ask them if they have teammate requests.

SF: How many teams did you start with and how many are there now? What has the league growth been like?

SS: We started with eight teams and have grown to 12 this year, with 10 players on each team. I have been slow to expand the league, as my goal is to have competitive games for the skill level of the majority of the players. If we expand too quickly, it dillutes the quality of play and competitiveness.

SF: Where do you get those cool uniforms?

SS: The uniforms are purchased each year. They are a solid-color dry fit uniform, and the teams get to choose the color they would like each year. I think that it adds a unique value to the league, rather than using the standard reversible jersey.

SF: What nights/days do you play and where?

SF: How many games per night and day?

SS: We play four games on Thursday and nine or more games on Saturday, with some teams playing twice.

Unlike many summer leagues we are not sponsored, and I personally make sure that we each year have a well-organized and competitive summer league in which players can compete against quality competition, and improve their skill set.

Team Purple (dark uniforms) and Team Hustle all brace for the pass inside.

Hustle wins the battle of this rebound.

Team Pagon, in the pink, and the NW All Stars faced off in the late game.

#9 for the All Stars was their best player. 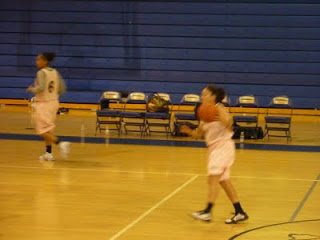 Faulk coils for the shot.