I certainly was not the only one to be attached to the Hangar Athletic Exchange’s previous location in Hawthorne. We’d all been trolling there for games for years. So when it was announced last winter that they’d be moving to Harbor City, people were bummed.

Today was my first time going to the new HAX, about 15 miles south of Los Angeles, and I had no idea what to expect. I was pleasantly surprised to find that I loved it. I might even like it better than the old location.

For starters, there is one more court than at the old HAX. This allows for a few more teams to come to a tournament. The ceilings are lower and there are more doors, which allow for better ventilation. Translation: it’s not the sweat box that the old place was.

There could be a few more bathrooms. But the fact that there is a hanging ceiling scoreboard at every court – and not one on a table that you can’t see – is worth standing in line to pee for a few minutes.

The Harbor City HAX isn’t quite as flossy as the Hawthorne HAX. There’s no fancy weight room for health club members; no pretty training room. But it has all the necessary things, including the old floors, and it feels like home.

It’s out of the way for most people, which is a detriment. But you can park on the streets there, which you couldn’t do at the old HAX.

I give the new HAX a thumbs up. 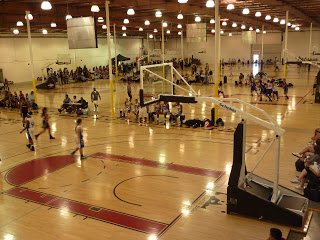 The north side courts: there are four of them. 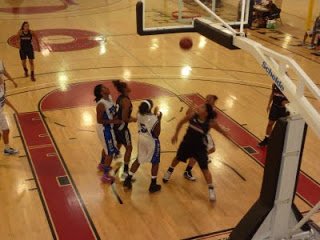 You can walk upstairs to get through to the south side courts, instead of walking all the way around, and in the process you get a good view. Here EBO Elite takes on Mission Rec Blue. 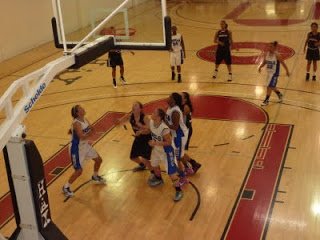 View from the other side of the basket. 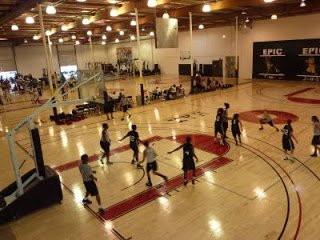 The two south side courts.