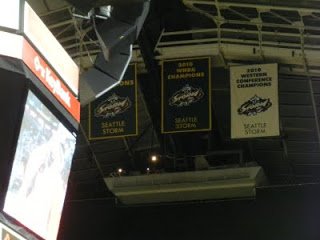 The 2010 Western Conference and League champions banners are raised in Key Arena yesterday prior to tipoff against the Phoenix Mercury.

The Storm pulled out the opening day win yesterday in front of a full house at home. Before tipoff, banners were raised at Key Arena for last year’s Western Conference and League championship. Star center and last year’s MVP Lauren Jackson lamented the lack of time to celebrate the franchise’s second title win:

“I wish we had more time to celebrate last year because we were in and out and gone (to the FIBA World Championships) and the moment was gone,” Jackson continued. “Everyone is saying ‘focus on 2011’ and I understand that being an athlete and I’m trying to, but it was awesome.”

My Storm correspondent Tate Strommen said the crowd was raucous, as usual, and the game was exciting and tightly-played. He said Katie Smith is a great addition to the team, and he was impressed when she went on a scoring tear.

After the game, Tate and his friend went to Jays for lunch – a place on the Seattle waterfront. Who should walk in but Storm point guard Sue Bird and Mercury forward Diana Taurasi – old friends from college.

Tate walked up to Bird and congratulated her on the win. Taurasi raised her leg, martial arts-style – and pretended to kick him. She said something about her team and Tate patted her on the shoulder and said, “sorry,” then continued to the restroom.

“I thought the whole thing was really funny,” Tate told me.

You never know who you’re going to run into in Seattle.