The event took place on the UCLA campus (which is so beautiful I wish I lived there). After diners went through the buffet line and were seated, Nikki Caldwell took the mic.

She began by thanking the supporting cast, such as the team managers, doctors and the scouting team – a group of young men who always sat near me. I didn’t know they were on scouting duty.

Caldwell pointed out how most of the Bruins were on the honor roll and didn’t miss classes or tutoring appointments. It’s because of this that respect for the program has grown in the school community, she said.

The outgoing coach then called each group up by class, starting with this year’s freshmen: Corinne Costa, Thea Lemberger and Rhema Gardner. She told them to continue to grow, because now they’d be the role models for next year’s incoming frosh.

Sophomores Markel Walker, Mariah Williams, Antonye Nyingifa and Jackie Shepard were next. Caldwell had a short comment about each of them, and then told them that time is short, and to make the most of it.

“Don’t wait until you’re seniors, because you’ve got two more shots at this,” she said.

Juniors Rebekah Gardner and Jasmine Dixon were next. Caldwell didn’t have any words of wisdom for them – just a lot of praise.

The seniors – Nina Earl, Darxia Morris, Christina Nzekwe and Doreena Campbell – were especially honored. Caldwell talked about how Nzekwe ran with her teammates in practices even when she didn’t have to do so. And about how she’d give Morris the clipboard occasionally during timeouts and tell her to talk to her team, and she did, with great results.

“Your growth in this program has left a mark that will never be erased,” she said. “You have branded this program.”

A bit later on, she and her three assistant coaches presented the seniors and others with awards. Earl got the persistence award and Nzekwe collected the investment award. Campbell won the Bruin award, and both her and Morris received basketballs for reaching the 1,000-point scoring mark. Dixon and Morris shared the co-MVP award. Apparently they have been homies off the court as well.

All four seniors were interviewed briefly for some humorous moments.

The evening ended with a well-edited highlight video of the season, which began on an exciting note with November’s win over Notre Dame. It became more sad at the end – especially when Campbell commented that her college career had gone by fast. And fortunately, that was the only sad part of an evening that could have been a real downer. To the credit of Caldwell and her staff, who are probably leaving town for Louisiana this week, they kept the evening all about the young people, as it should have been.

I interviewed some other season ticket holders about how they felt about Caldwell’s departure.

One couple said they were “devastated” when they found out that weekend.

“We thought she was going to build a dynasty,” one said sadly.

One half of another couple said she felt like she’d been “kicked in the gut” on hearing the news. (This is the couple who went to every UCLA game this season, home and away.) But she said LSU had gone after Caldwell specifically, and the salary they offered her was unbeatable.

The general consensus last night among other fans seemed to be much the same.

We’ll see what happens next with this program. 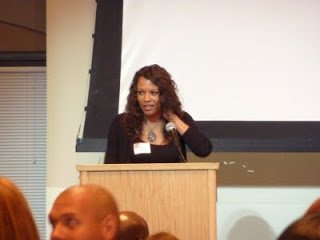 For the last time, Nikki Caldwell addresses the UCLA team and Bruin fans. 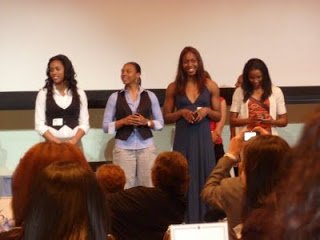 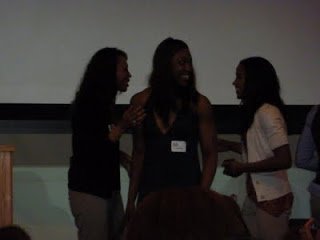