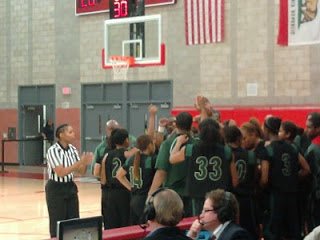 Narbonne at a timeout.

Mater Dei overcame a tough Narbonne squad in the Division I state regional semifinals tonight, on their home court.

Looking at the game on paper, it should have been no contest. Mater Dei is ranked first in the nation, and Narbonne was unranked. However, this game was a lot closer than the final score indicates.

Narbonne, playing its third game Orange County road game this week, played the Monarchs as well as anyone could expect. In fact, the Gauchos led 10-8 after the first quarter, tied the game 24-24 at the half, and were trailing 36-40 after three periods. Then Mater Dei finally turned on the jets midway through the fourth and outscored Narbonne 30-6 the rest of the way for the lopsided victory.

The Monarchs played without two of their starters – junior Alexas Williamson, out with an appendectomy, and junior point guard Jordan Adams, out with a seperated shoulder. Their statuses for next weekend’s regional final is unknown.

With those two out, Mater Dei needed outstanding efforts from the rest of the team, and they got one from senior forward Alexyz Vaioletama. She had 25 points and well over 10 rebounds for a double-double. She also had several blocked shots. Kaleena Mosqueda-Lewis, who had only two points in the first half, finished with 14 for the night, and Kiki Alofaituli had 11.

Narbonne was led by senior guard Tailer Butler, who had 11, and senior Atoe Jackson, who had 14 points. Just a note on Jackson: this is the second time I have seen her play this week, and for a girl who is listed at 5-foot-9, she plays as tough as can be – and mainly in the paint. 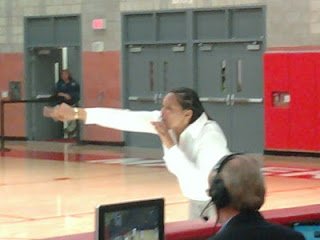 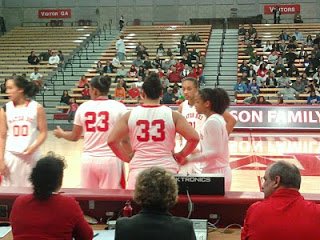 Mater Dei players gather when a Narbonne player is injured.

One more day of regular-season play