The nation’s top two teams met last night at the Anaheim Convention Center to decide not only the state’s 1AA division winner, but the number one ranking. In the end, it was Mater Dei who walked away with both.

The game can probably be broken down by two offensive runs for Mater Dei. The first was a 16-0 run to close out the first quarter. Brea hit the first two baskets of the game after both teams missed a few shots, and lead 4-0. Then MD’s Alexyz Vaioletama hit for six points, Kaleena Mosqueda Lewis added five points, and the Monarchs went on a roll that Brea couldn’t stop.

The second run for MD was to start the second half. The Monarchs led 32-25 coming out of the break, and ran off eight straight points to lead 40-25. Brea had to play catch up the rest of the way. The closest the Ladycats got was 59-54 with about 1:24 minutes left in the fourth quarter, but they couldnt score after that and MD made some free throws to put the game out of reach.

The Monarchs played as a good a team effort that I have seen them play – especially on defense. Early in the game, Jordan Adams covered Brea forward Justine Hartman in a man-to-man defense. Hartman ended up with only six points, and all were from about 15 feet on jump shots; none of her customary post-up moves or rebound put-backs. The rest of the time it looked like Mater Dei played a 1-2-2 or 2-3 zone. The zone really protected the box, and most of the Brea players couldn’t score from that area.

Alexis Perry had 22 points for Brea and really showed her point guard talents to the crowd, and to several college coaches I saw during the night. Vaioletama had a double-double, scoring 11 points and bringing down 13 rebounds before fouling out with 2:36 left in the game. The USC recruit played aggressive under the boards in front of Coach Michael Cooper. Mosqueda-Lewis finished with 16 points.
These two teams can, and most likely will, meet again in the next two weeks in the state regional finals for the Southern half of California. I expect that game will be just as intense. 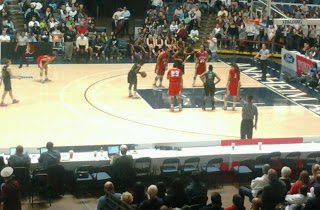 Alexis Perry ready to take a free throw for Brea. Notice the Brea bench players sit with their legs crossed. If the player makes the free throw they snap their fingers and uncross their legs. 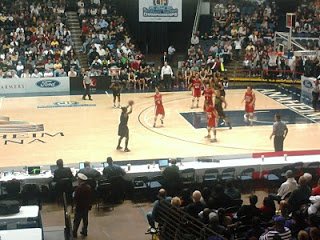 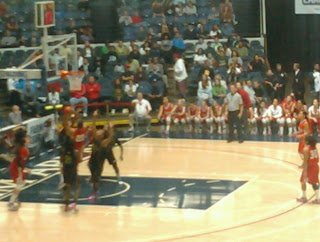 Kaleena Mosqueda Lewis finishes her drive, through 4 Brea defenders and will hit her basket.

– Poly beat Mater Dei twice
– Brea beat Poly twice
– The teams had been ranked #1 Brea, #2 Poly and #3 Mater Dei for most of the year
– Poly lost in the playoffs last week to an unranked team, which sent them plummeting to #15 in the Powerade rankings this week
– Last night was the first meeting this season between MD and Brea

What does this all mean?

The only thing I can say for sure is that Mater Dei is playing like a machine now. As reported in this space, when I saw them pummel Bishop Montgomery back on Jan. 29, they blew me away with their unity and fluidity. With all due respect to Ladycat Coach Jeff Sink, I would rank Mater Dei number one at this point in the season.

But never count Brea out. If these two teams face each other again next week or the week after, all bets are off……..