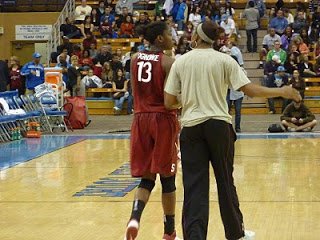 Chiney and Nnemkadi Ogwumike walk out of the locker room just before the second half. Nneka was talking emphatically to her younger sister….and Chiney had a big second half.

It was an exciting game for the first half and some change. Both UCLA and Stanford were trying to out-defend each other, and it was working late into the period as the score hovered in the early 20’s. At the half, they were knotted at 28 points a piece.

Then freshmen Chiney Ogwumike lead Stanford upward and through the two more gears that seem to separate them and the other top four teams in the country from everyone else. She put up 13 of her 18 points in the second half, and was aided by another freshman – Toni Kokenis – who had 13. The Cardinal had to do it, as the Bruins had taken Jeannette Pohlen and Kayla Pedersen out of their normal rhythms. Graham Hays has it: the freshmen came through for Stanford……

Perhaps the gap is closing with a program on the rise in Westwood, but Stanford is still more than any one player. And it’s still better than the rest of the conference by a margin greater than the skills of any individual, even one of the nation’s best players.

Freshmen Chiney Ogwumike, Nnemkadi’s younger sister, and Toni Kokenis really want to be out there.

Nicely-put, and well-said by Tara VanDerveer. The longtime Stanford coach had beseeched Chiney at halftime to step it up, as her older sister sat out with an ankle injury from Friday night’s USC matchup.

The stats are interesting. The two teams were dead even in assists and turnovers, and only one different in rebounds. The main difference was the shooting, as the Cardinal was 43.5 in the second half and 42 on the game, while the Bruins were a respective 28.1 and 31.1.

One of the day’s highlights was the 6,725 that showed up at Pauley Pavilion. I haven’t seen that large of a crowd for a game in a long time.

I think the gap between Stanford and the rest of the Pac-10 is indeed closing. But like the rebounding of the economy, it’s not happening fast enough.