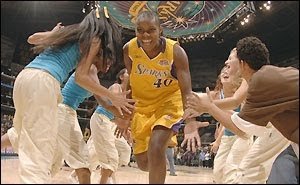 Los Angeles native Lisa Willis is introduced in 2007, during her stint with the Sparks.

Lisa Willis was doing more than getting into her usual pickup games at gyms around Los Angeles this summer. She was also on the hunt for young people to train.

The Bruin-turned-Spark-turned-Liberty team member was checking out a high school club ball tournament at Mater Dei High School in late July, and talking to kids on the sidelines of basketball courts at gyms. This is because Willis is jumping into retirement with a lofty mission: she wants to try and help save girls and women’s basketball.

Need a jumper? is the name of Willis’ business, and her primary focus is to help young players develop basketball skills. She said that over the last few years she’s noticed that girls lack fundamental skills, and it’s effecting the state of the game.

“It seems like there’s not a whole lot of player development going on – the kids are just out there playing,” Willis said. “On the whole, they aren’t being taught many fundamentals.”

Why? Willis says that for one, boys and men are more likely to go to the gym and workout, because it’s “cool” for them to do so. Secondly, not as many coaches work with girls on skills or conditioning. A third reason is that there is a lack of old-school work ethic in some sectors.

“On my old club ball team, everyone worked hard to get on the top squad,” she said. “Now some of the parents whose daughters don’t make the top team take their daughter and start their own team. There’s no work ethic.”

Willis worries about this.

“I want longevity for women’s basketball, and if we don’t take care of this issue, there won’t be anything to look forward to in the future,” she said.

Despite the name of her business, Willis works on everything with clients: shots, layups, dribbling skills, positioning the ball on offense, defensive tricks and offensive moves.

“It depends on how advanced the player is that I’m working with as to what we work on,” Willis said. “If they’re advanced, I like to give them moves to use in a game.”

Willis tries to pass on her own self-described “high basketball IQ” to trainees, because it’s not enough to just know the moves.

“If you don’t understand the game, that’s a problem,” she said.

Willis works with both groups and individuals. Here’s her self-written biography:

Lisa Camille Willis was born June 13, 1984 to Robert and Sandra Willis in Long Beach, California. The youngest of five children, Lisa started playing basketball early on in life. She began playing in winter basketball leagues at the YMCA and spring leagues at neighborhood parks, and Lisa soon realized that she and basketball were a perfect match. At the time, Lisa was adamant that she would grow up to play in the NBA as the WNBA had not yet existed. As a result, her parents recognized the important investment of personal training for Lisa with distinguished players; at nine years of age, Lisa began working with some of the best players and coaches California had to offer. Lisa’s parents saw dividends during her high school career as she was awarded California’s Sophomore Player of the Year, a Nike All American, and played a vital role in her high school team winning multiple LA City Championships, State Championships, and back to back National Championships. All her hard work paid off when she received a full scholarship to attend the university of her dreams.

As a highly sought after student-athlete, Lisa chose to attend UCLA. There, her accomplishments remain celebrated: Lisa continues to hold the PAC 10 Conference records in steals and made three point shots. After having a remarkable junior year at UCLA, Lisa was invited to tryout for the 2005 USA Collegiate Team. Not only did Lisa make the team (only twelve college players across the country made the team) but she was instrumental in bringing home the gold metal from Izmir, Turkey. After earning her bachelor’s degree in Political Science from UCLA she had aspirations of going on to law school; however, Lisa soon realized that the WNBA would, instead, be her next step. Lisa was the 2006 WNBA overall 5th draft pick to the Los Angeles Sparks. Lisa also played two seasons with the New York Liberty. In addition to the WNBA, Lisa has spent her off seasons playing professional basketball in various European countries, including Russia, Greece, Turkey, and Latvia; most recently she won the 2010 Latvian Championship.

As Lisa transitions to her new basketball role, she continues to recognize the need for player development. Lisa has provided basketball mentorship since her days in college. In 2009, her desire to focus on youth development grew momentously, and she founded NEED A JUMPER Personal Training. Lisa’s youth development program not only focuses on the enhancement of players’ physical abilities and talents, but nurtures the growth of their “basketball IQ.” In other words, players are taught how to think critically about the game of basketball and develop mastery of the science of basketball, similar to that of a chest player. Nevertheless, Lisa is renowned for her shooting abilities and she teaches youth all she knows about becoming the most accurate shooter and an all around threat on the court. In addition to individual and group training sessions, NEED A JUMPER Personal Training provides motivational speaking, a regime of independent conditioning, post-game assessments, and community basketball camps and clinics.

Willis can be reached at: Lisa@needajumper.com