I’m not going to comment on yet another pointless loss to another sub-par team. I’m going to focus on the positive instead: Tina Thompson breaking Lisa Leslie’s WNBA scoring record.

She got off to a slow start in the game and had only six points in the first half. But in the third quarter she went on a personal run, and pretty soon she was squaring up to hit the basket that put her over the top. I jumped up out of my seat and yelled, “Whoo! There it is!” And less than 10 seconds later the Staples Center people started playing Tag Team’s “Whoomp, there it is!” as the crowd screamed.

Congrats to Thompson on her milestone. Too bad the Sparks couldn’t celebrate it with a victory, too. 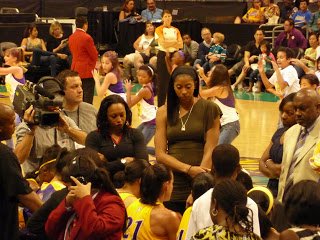 Betty and Candace look nice in street clothes, but I wish I didn’t have to look at that, if you know what I mean. 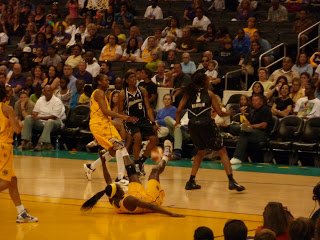 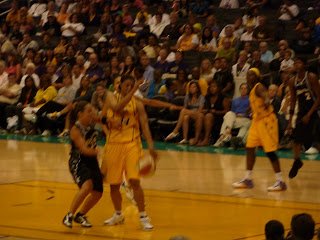 Blurry, but I really enjoyed this Lindsay Wisdom-Hylton block of Becky Hammon. 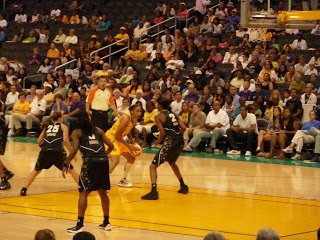 Just before Tina Thompson became the WNBA’s all-time leading scorer, she was hot and playing aggressively (above). 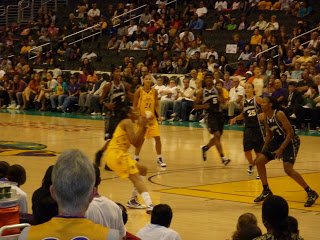 Tina squares up to hit the shot that puts her over the top……. 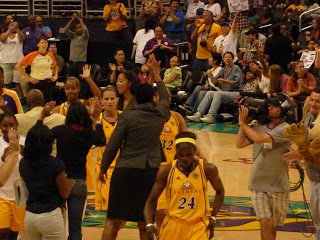 ….and gets mad congrats and cheers from all. 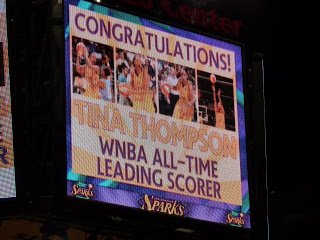 Not to mention a nice salute on the jumbotron. 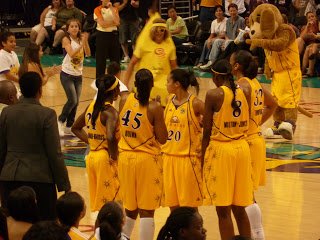 Jamba Juice was introduced as the new sponsors, bless their healthy hearts. Check out the banana mascot in the background. 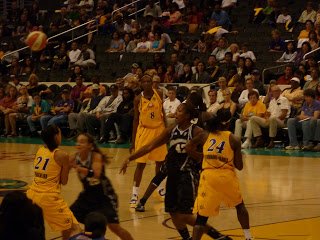 Delisha Milton-Jones telegraphs a pass to Kristi Toliver in the fourth quarter.

During the game they flashed the Mercury-Fever score, but we didn’t realize what a physical game it had been. DeWanna Bonner sustained a concussion after being knocked unconscious briefly in the game. That’s scary! Get well, DeWanna and Jessica Davenport.