It’ll be PHP and last year’s runners up LA Spirit in next Saturday’s Just Say No League championship game, after today’s full round of quarterfinal and semifinal games at the HAX in Hawthorne, CA.

Scores from the four games I saw today:

Maybe the best game of the day was 2K10 vs. the Westsiders. The players on each team matched up very well, and both teams fought hard. Either team could have won it, but 2K10 had the lucky shot today.

Defending champions Fast Break vs. Cal Poly Pomona was also a fierce battle. Fast Break got out to an early lead, but in the second half CPP went on a run and caught up. FB held them off for the win.

LA Spirit and 2K10 started off pretty evenly, but LAS ran away with it at the end.

The second semifinal saw PHP take an early lead, but Fast Break surged to catch them. PHP stayed ahead by 2-4 points the last few minutes, due mostly to their great shooting; Fast Break’s shots seemed to be off. The refereeing was also horrible, and here’s where I have to go off.

For all the women’s games today, refs in training were used. You know – where they use officials that have to practice to earn certification, and at timeouts they all meet on the court with the referee teachers? Right after the last semifinal game, the men’s Just Say No League took over the court, and a whole new set of refs came with them: experienced LA City Section refs that I recognized, who today were wearing “Pro Am League” referee shirts, indicating they have extra certifications.

Why do the women get the crap refs and the men get the good refs? That pissed me off. 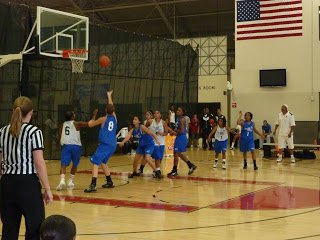 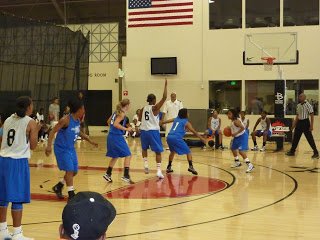 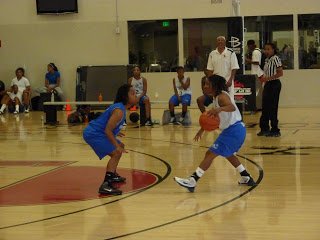 ….and a few plays later initiates a drive. 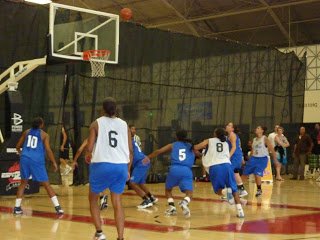 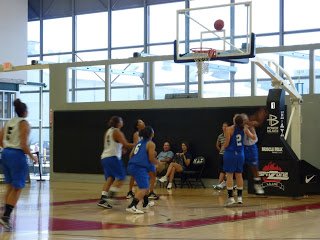 A bad shooting day and even worse referees did Fast Break in, though.