All I have to say is, what happened to Seattle-based Tree of Hope since last summer? They were good last year, but they’re beasts now. And tall as the trees they’re named after.

Last night they beat Team Elite 76-26, and early this morning they put away the Oregon Reign 66-49. This afternoon they overpowered and dismantled a solid Texas team. I was impressed. Tomorrow morning’s matchup with reigning tournament champion JBS Purple should be quite the game, as JBS was also looking strong today. 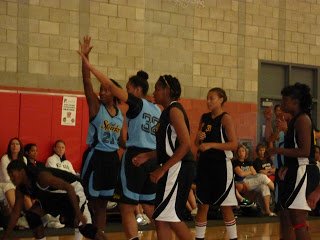 Reshanda Gray and Nita Iamaleava of Cal Sparks Gold freeze in their defensive position in this morning’s game, as the ref calls a bogus foul on Gray. Gold saw a 15-point second half lead disappear, but hung on to beat So Cal Magic Black 62-60. 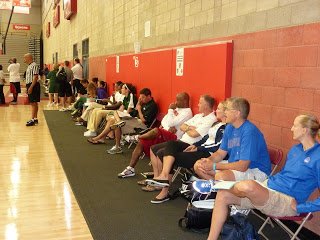 Wall ‘o coaches for the afternoon session. The coach from the school furthest away that I saw was North Carolina State. 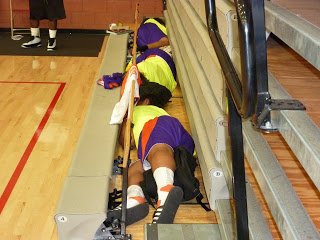 Some players, like these from the JBS squad, are fatigued by the end of July. 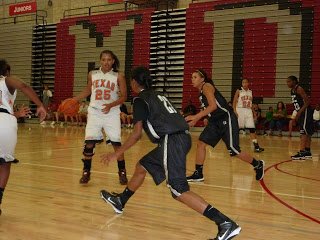 Kathryn Tolbert of the Texas D-1 Ambassadors brings the ball up court as Tree of Hope’s Aminah Williams steps in on defense. 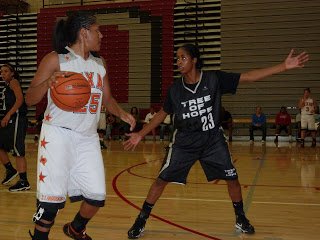 Tolbert looks to pass around Williams. 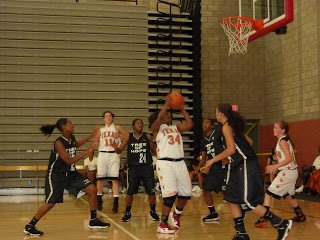 The Austin-based Ambassadors were very fast, but Tree of Hope’s smothering defense and dominating play was too much for them. 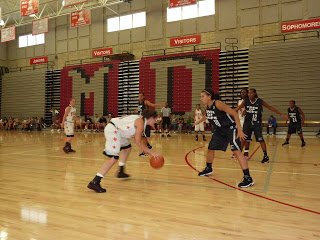 Ambassador Julie Diriengo attempts a drive. The team didn’t understand the officiating today. One player remarked to me that “In Texas, they let us tackle each other. Here they call every little thing.” 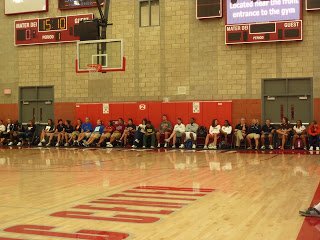 The coaching wall was packed for the Cal Sparks Gold-Hanford Heat game this afternoon. 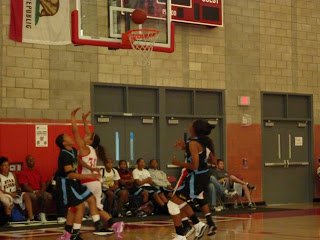 Ariya Crook-Williams (far left) had a crazy reverse spinning layup that went in (above). 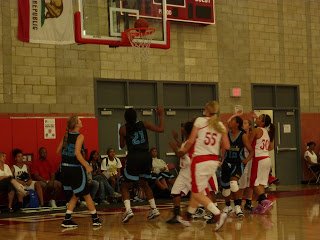 Gray is poised for the offensive rebound, but it’s not necessary. Gold blew them out, 79-27. 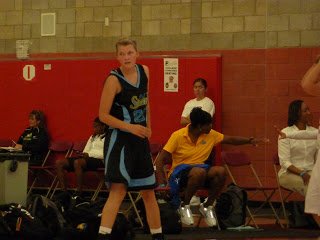 Kari Korver, a mere junior this coming year, is one to watch. She’s got a silky three-shot, poise of an older player, and fights for every loose possession. A fun player to see.