I wish I could do the same for the Nike Just Say No Classic in Los Angeles, but the event organizers still haven’t posted the schedule yet almost three weeks into the action. The only thing about the website that’s been updated is that on the main page, it says it’s the 20th year for the Classic. The schedule links all go to last year. When I go, I don’t know what team is playing who, because the schedule that is posted on the wall doesn’t have team names – just coach names: “Louie, Therese..” etc. So I have no idea who UCLA’s Doreena Campbell and Mariah Williams play for, but they were fun to watch Sunday. Here are some photos: 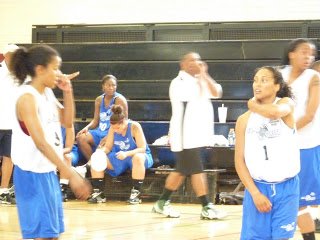 UCLA’s Doreena Campbell and Mariah Williams confer as their game is about to get underway….. 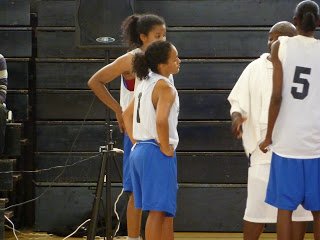 …and at a timeout.