Washington got payback for that Sparks opening night win. I honestly didn’t expect a victory from Los Angeles after it was announced just before tipoff that Betty Lennox would be out for up to six weeks after knee surgery.

I want to take this time to commend Sparks owners Kathy Goodman and Carla Christofferson. They are truly the best owners in the league, and the tenor they’ve created at home games is one of caring and fun. They’ve truly changed the Sparks basketball experience, and fans really appreciate it. Goodman and Christofferson have also made it impossible to hate the Sparks as WNBA fans used to love to do. It just ain’t the same, they say.

To be sure, Goodman and Christofferson didn’t expect what they got when they bought the team in the fall of 2006. Soon after that, Lisa Leslie announced her pregnancy, and that she’d be gone for the 2007 season. The Sparks had their worst-ever record that year. That lead to the drafting of number-one pick Candace Parker, of course. But this is how that season ended, with our MVP in anguish over a last-second shot in the playoffs: 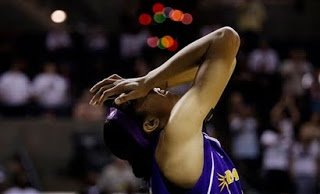 That picture still pains me to this day.

Last year expectations were high with the signing of Tina Thompson, but the Sparks couldn’t seem to pull it together. This year same story, plus the injuries.

I wanted to shout out Goodman and Christofferson because I know they won’t give up. All this has been discouraging, but the Sparks’ time will come. If anything, these seasons will show these owners who their team’s true fans are.

Hang in there, Sparks staff and fans.