Congrats to Tina Thompson for her 6000th career point. That’s an amazing achievement. I also appreciate the way she stepped up last night, and I hope she can keep doing that. Hopefully next time, though, the Sparks won’t get refs who call a three-point shot a two-point shot.

Check the box score and what I’ve been talking about since the beginning of the season is in lights: the Sun outrebounded the Sparks 44-26. If they just improved this one statistic, they’d start winning games outright. I hope Coach Jennifer Gillom decides to try this.

In the meantime, fans who want to meet the Sparks can do so Tuesday as they make their annual trek to the Long Beach Trader Joe’s to take over the store. Fans can get autographs and watch players bag groceries and tend the salad bar. I’ve been the past two years, and it’s a humorous event. 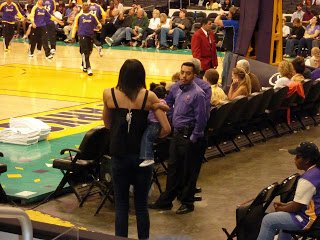 Candace Parker emerged out of the tunnel before the game with daughter in arm, to hand her off to her mother for the game. 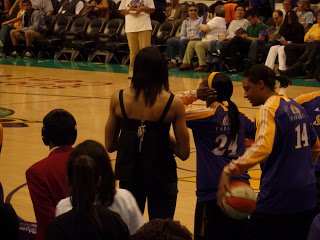 Momma Parker has ridiculous musculature around that messed up shoulder. 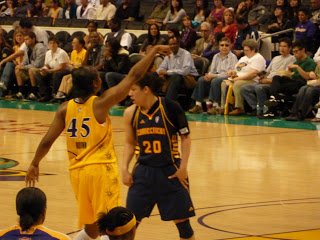 When did Kara Lawson mess up her shoulder? That’s two Lady Vols with shoulder issues on the same court. 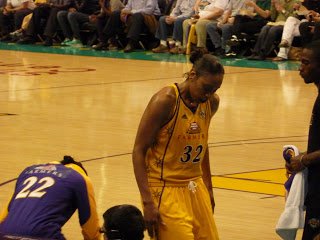 Tina Thompson comes off the court after scoring her 6000th career point. 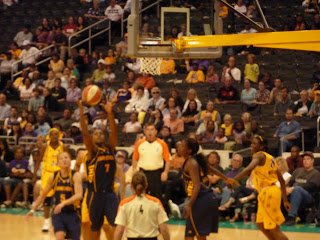 Here’s one big problem: the Sparks get out-rebounded most times under the basket. Here, Sandrine Gruda does the job. 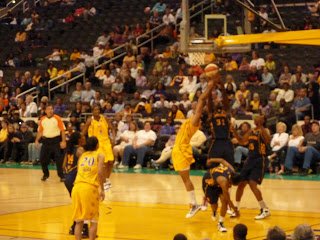 Tina Thompson really tried to get the board on this possession, though. 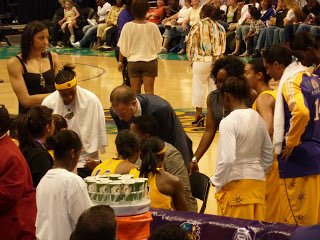 This is not the kind of timeout picture I was hoping to see this season. 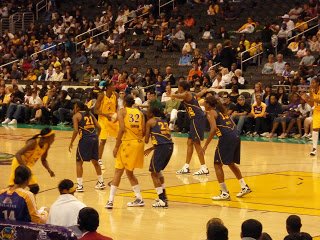 Another problem: mass confusion for the Sparks on offense. What play are they running? is the usual question from the audience. Here, Delisha Milton-Jones tries to find an open teammate to whom she can pass the ball.