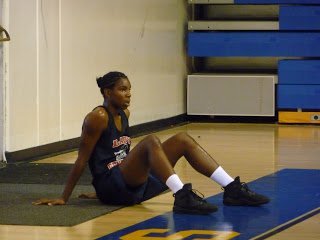 Reshanda Gray rests during halftime of a fall league game in which her Washington Generals played last Oct. 17.

Los Angeles – If there is a Cinderella of LA high school basketball, Reshanda “Too Tall” Gray is unquestionably it.

For the 2007-2008 season, then-freshman Gray was on Washington Preparatory High School’s JV team, where she helped lead them to the City Section JV Championship. She was good, but she didn’t stand out all the time on a talented roster.

At the beginning of the 2008-2009 season, Gray made an immediate impression her first week playing varsity. I thought, she’d obviously worked hard all summer playing for her club team, the Cal Sparks, and in the fall for Washington Coach Ricky Blackmon. Her stats at the end of the season were impressive; she was her team’s leading rebounder. The Generals won the league title that year for the first time in over a decade.

Gray began the 2009 club ball season playing for the Sparks’ second team. On Memorial Day weekend, she was moved up to their top team, where she stayed all summer long.

This past season, Gray dominated, and lead her team to an unexpected repeat league title. She was the subject of newspaper articles and other writings. Now she’s just made the USA Basketball team. But her coaches and those who know her aren’t surprised at her unfathomable growth.

Blackmon attributed Gray’s presence on the U18 team to her hard work and her hunger.

“Reshanda has an incredible work ethic and a willingness to do whatever it takes to get better,” Blackmon said. “She has a desire to get really good, and she’s always out there looking to be the best she can be.”

Blackmon said he could tell fairly early on that Gray had the proverbial “it” that good players have. But it wasn’t until Gray figured that out for herself that she took off.

“Once she bought into herself as a basketball player, she started progressing really fast,” he said.

Gray’s Cal Sparks Coach, Elbert Kinnebrew, said he wasn’t at all surprised that she was named to the U18 team – and for many of the same reasons as Blackmon.

“Reshanda works harder than most players day to day, is fierce competitor, and is always working to improve her skills,” he said. “She’s a floor leader in every aspect. Shes a good ‘talker’ on the floor on the defensive end, is hard-nosed yet a very ‘clean’ player. She can dish it out in the paint, yet does not take it personally when her opponent returns the physical play inside.

“She doesn’t have the accolade resume as some of the other players in Colorado because shes a relative late bloomer on the national scene. However, it’s clear the coaches and the committee recognized her intensity, effort, and the skill that she brings in the post.”

Blackmon is ecstatic for Gray.

“I can’t even put it into words – I don’t even know how to express how proud I am of her and all that she’s accomplished,” he said.

Kinnebrew said his first thought upon hearing the news today was that it “couldn’t happen to a nicer person.”

“Reshanda is a delightful young woman who doesn’t let the attention change her attitude or unselfish and humble nature,” he said. “I am thrilled that she will get to experience playing for her country in the International games. I feel that Reshanda is an excellent role model for the many young girls playing sports in Los Angeles and in inner cities across America.

Being a teenager in today’s world is so much more complicated than it was when I was in high school in the 1980’s, with far more distractions. In inner cities – and maybe especially LA – there are gangs and other issues for teens to contend with. And those issues are far, far more than the general public realizes or understands.

I’ve seen a lot of talent fall by the wayside, and it kills me. It takes a strong and focused person to believe in themselves, believe in the possibilities, and to rise and fly.

I drove past Washington Preparatory High School on the way home tonight, and I had to smile. Reshanda Gray, from this high school in this rough neighborhood, is going to represent her country in basketball, I thought. A kid who was playing for the JV team two years ago, and who has had to jump over some big hurdles in life.

That is a hell of an accomplishment.

All I have to say, besides congratulations, is: where’s the viewing party going to be this August? 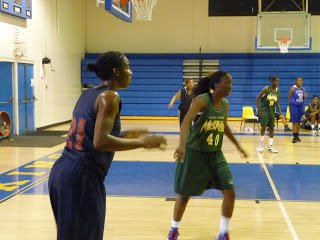 Too Tall kept getting herself open in the left corner for the pass that day. She’s a smart player.