Hoopism has, in the past, invited readers to bring great players/unsung heros to our attention that they feel deserve a look. Aspiring journalist Danielle Brown has done one better: she wrote a column on some of these athletes. She also “hired” Hoopism, who was chillin at a tournament this past weekend, to take pictures for her piece.

Hi – I’m Danielle Brown, and I have been playing for the Cal Sparks for two years. During that time, I have seen some of the best players from all over the country. But the ones that stand out the most to me are the players from Cal Sparks.

Cal Sparks Gold, which is the organization’s top team, is full of talent. For example, Reshanda Gray is an awesome post player who improves every game, and Janitah Iamaleava is another post player with a positive attitude. Ariya Crook-Williams is five-foot-seven inches, but rebounds and plays like she’s much taller. We on the Sparks all know and love these players, but there are up-and-coming rising starlets on the other Cal Sparks teams, too.

Camille Baker plays for Cal Sparks Black. I played with Camille last year on the Sparks 16s team, and I loved it. Camille is the ideal player because she plays tough defense, dives for loose balls, and she always wants to improve her game. If she can up her offense before July, she will have no problem finding a college to attend in August 2011.

Samira Fields (Sam) also plays for Black. I have had the pleasure of playing with Sam after I changed teams and ended up on the 17s last year. Sam knows the game well. Her shot is unique, but it goes down, and when she is hot she is HOT. I hope she can improve a little in both defense and offense before the July tournaments kick off.

Chante Miles, who plays for Gold, is new to the Cal Sparks family. She was on Black at one time, but Coach Elbert (Kinnebrew, Cal Sparks Director) brought her up to Gold to replace an injured player. Chante is a very intelligent player. From the top of the key she dribbles the ball and looks around, seeing absolutely everything on the floor. I call her a PLAY MAKER. Chante most def has an eye for the game, and I predict that after the travel ball season is over, she will have had a bucket full of offers.

There are soooooo many up and coming Stars in the Cal Sparks Program. Here are just a few:

Cal Sparks in my eyes is the best traveling basketball program around. With five ranked players, including one that has received an invitation to try out for USA Basketball (Gray), Cal Sparks has introduced us all to some outstanding players past, present and future.

(Hoopism’s note: see the “overtime battle” and “buzzer beater thriller” comments in the margins of the scores of this past weekend’s tournament? Both were because Camille Baker put up a last-second shot to win the game). 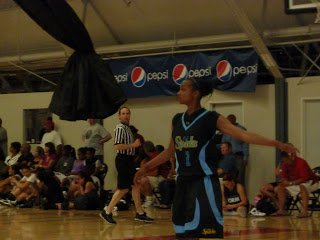 Camille Baker tries to catch her teammate’s attention during one of Cal Sparks Black’s Saturday games. 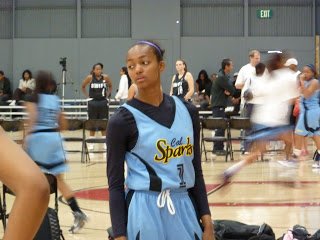 Baker waits for a free throw during the first Sunday game. 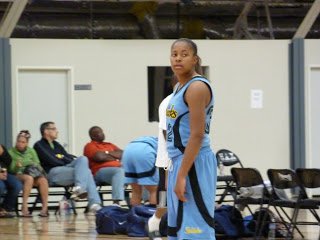 Samira Fields sizes up the competition. 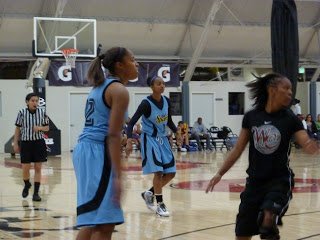 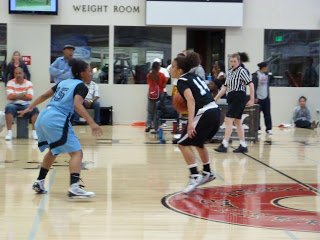 Danielle Brown plays for Washington Prep High School, where she is finishing her junior year. Brown, a forward, and the other Lady Generals won the Marine League title this past season.