It was a bit of a letdown, this hyped-up game.

From jump, the Whitney Young Dolphins of Chicago looked anything but the seventh-ranked team that they currently are. Poly scored nine points in the first two minutes – twice on back-door plays. When Young called a timeout at the six-minute mark, the tone of the first half had been set. The Dolphins finally put up some points a short time later, but the Jackrabbits answered every time. It was 17-12 Poly at the end of the first.

Poly began the second quarter on a rampage, with sophomore guard Destiny King’s drive for the layup. A Young turnover later, it was a fancy three-pass play for the score that made the Long Beach crowd yell. Junior guard Ariyah Crook-Williams was on fire in general, and especially with three-point shots. The Jackrabbits were literally running circles around Young, and they lead 31-17 at halftime.

At 5:16 to go in the third, senior forward Alexis Lloyd’s bucket seemed to ignite her team, and the Dolphins began chipping away at their opponent’s lead. Poly was ahead 35-23 at the 2:52 mark when Young Coach Corry Irvin was whistled for a technical foul when she protested a charge call on one of her players. Usually coaches step back when they’re T’d up, but Irvin stepped to the ref and got in her face. I thought that was pretty gutsy. Poly Coach Carl Buggs went over to Irvin and talked to her for a moment. I’m betting he was explaining the California rule that when a coach is assessed a technical, she/he has to sit down for the rest of the game.

The tech seemed to fuel Young on. They began their run then, and continued it into the fourth quarter. They began playing defense, and limited Poly’s scoring. The Jackrabbits had lead 46-31 going into the last period, but by the 4:47 mark, their lead was only 46-40. Young got as close as five points, with the score 48-43 with 2:41 to go. But a couple of turnovers and a Crook-Williams three was enough gas to propel Poly to the win.

I have no doubt Young had a bad game and played below their potential tonight. I saw flashes of brilliance in the fourth quarter with the trapping and defensive sliding, and with their speed. They are, after all, a relatively short team. But I just wish they would have brought their A-game from the get-go, so it could have really been a game. I keep wondering if they’d started out in a zone instead of man, if that would have made the difference. But they never even tried the zone. 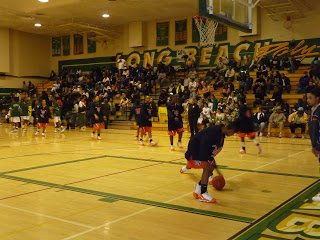 Whitney Young warms up for the game…… 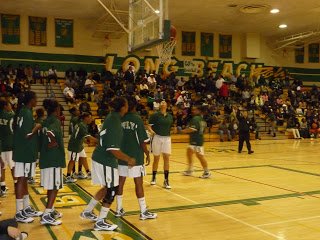 …..as does Long Beach Poly 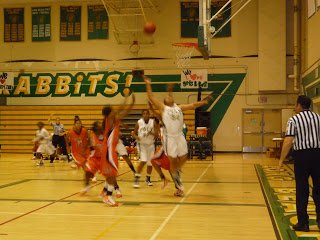 The lighting at the Poly gym was even worse than the lights at Ayala, which is hard to believe. But the Jackrabbit’s Destiny King (#34) was big for her team tonight, seen here getting an offensive rebound in the first quarter. 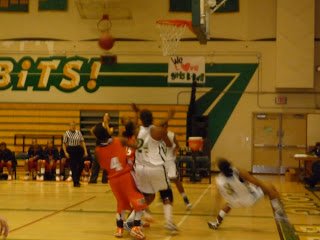 Poly’s Ariyah Crook-Williams (#3) was also big tonight, seen here sliding after she drove and threw up a shot in the second quarter. 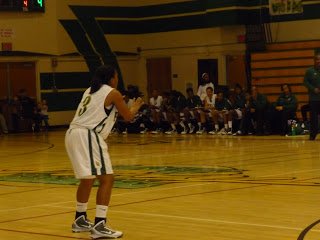 C-W was always ready for the pass….. 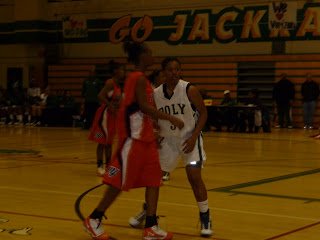 …..and played great D. But her shooting was ridiculously good. 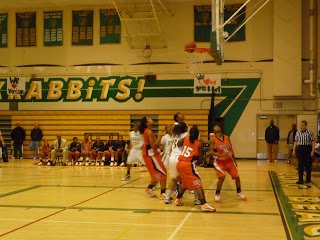 It finally goes in: Young was hot, hot, hot in the second half. If they had played like that the whole game, things might have turned out differently.