What a night at the Ayala Extravaganza.

The Long Beach Poly Jackrabbits barely escaped with their lives in tonight’s premiere game, rallying to beat a tough and talented Bellarmine-Jefferson Guards team. The Guards had outplayed the defending state champs, took them out of their game and flustered them at times with their incredible hustle, penetration to the basket and great rebounding.

Poly took a small lead in the first quarter, but that didn’t last long as Bell-Jeff took over the lead in the second quarter. If it wasn’t point guards Rishonda Napier and Margeaux Gupilan taking it to the hole or popping a non-rim jumper, it was center Jasmine Smith putting up a layup or yanking down a rebound on the defensive end for the long pass up court. Then reserve guard Leslie Lopez-Wood came in and started dropping 3’s.

Poly’s defense had no response. But Bell-Jeff’s defense kept Poly from scoring as much as they’re used to. The Jackrabbits seemed completely flustered at times. In the fourth quarter, Poly supastah Ariyah Crook-Williams was called for a foul as she landed on the ground. She jerked up in protest and then rolled twice, angrily, before getting up.

The Guards were down 35-31 with two minutes to go in the second quarter. They went on a 6-0 run to end the half ahead 37-35. They continued their dominating, disruptive play into the third, after which they lead 51-48.

But at 5:50 in the fourth, Poly had clawed up to a 51-all tie, and the momentum of the game changed. The Jackrabbits seemed to gain strength finally, and took their defense up a notch. Still, Bell-Jeff could have won if they had sunk the six free throws they missed in the period.

I have been wanting to see the Guards play for the longest time, and I had a feeling about this game. I’m so glad I went. I’m definitely a Bell-Jeff fan now. They are small but very well-schooled in the fundamentals. They are rattled by nothing, and they can be deadly from both inside and outside the paint.

They’re only going to get more scary, too: there are only two seniors on the roster. Two others are juniors. The rest are sophomores and frosh. 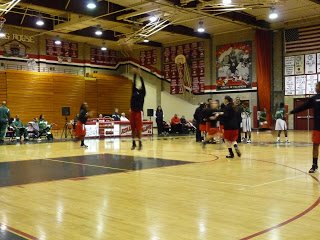 I got a feeling for what was up by watching Bell-Jeff (red and black gear) warm up. They were running their stuff and would randomly yell affirmative statements at each other. For example: “Let’s go, ladies!”, and random noise. They were getting each other pumped up. I loved it. 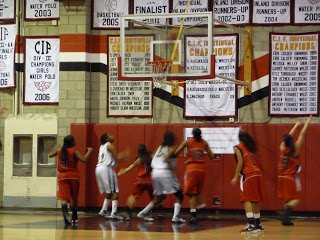 The Guards were boxing out like beasts. This 5-on-2 situation, or something similar, was continuous. 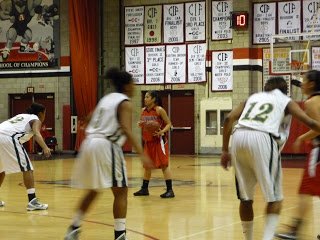 Point guard duties alternated between Margeaux Gupilan (above), one of only two seniors on the team, and Rishonda Napier. Both did an excellent job seeing the floor, cutting and driving. 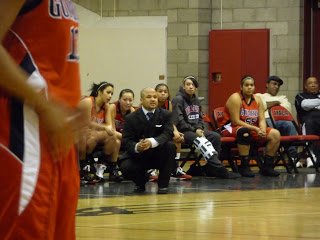 Bell-Jeff Coach Bryan Camacho is intense. He yells like he’s talking to a football team, i.e. intense voice, and often. He never stops moving, either; never sat down once. On the plays where his athletes were hesitating on the perimeter, he’d yell “Attack! Attack!” More coaches need to yell that at their teams. 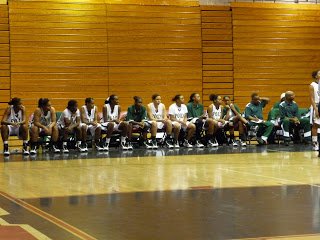 The Long Beach Poly bench is long: 11 players, to go with the five on the floor. 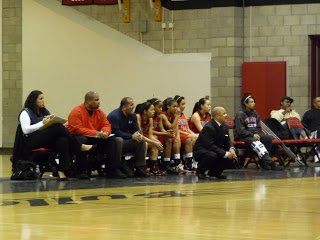 The Bell-Jeff bench includes five suited up players and one injured player. 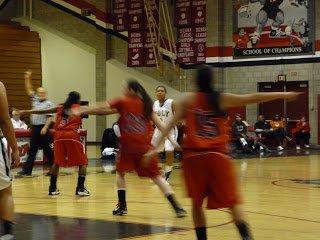 Poly All-Star Ariyah Crook-Williams brings the ball up the court into the Bell-Jeff swarm. 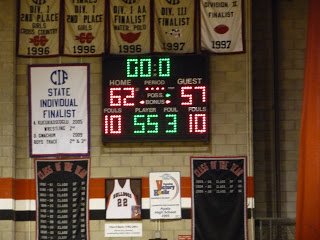 I counted six missed free throws by the Guards in the fourth quarter. Guess what would have happened if they’d made them?